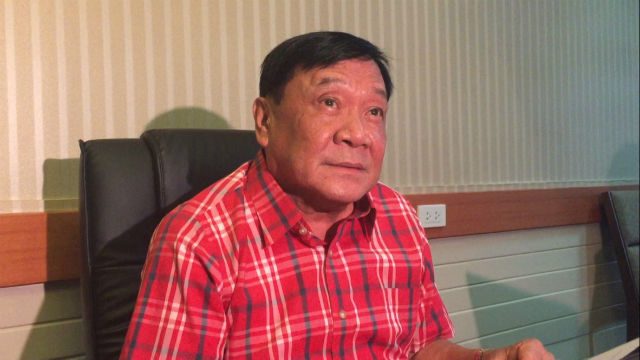 MANILA, Philippines – A few hours after President Rodrigo Duterte cleared him of alleged links to the illegal drugs trade at the New Bilibid Prison (NBP), Pangasinan 5th District Representative Amado Espino Jr thanked the Chief Executive and said he was “humbled” by the latter’s public apology.

“I am humbled by the pronouncement of the President today on clearing my involvement on the alleged drug matrix released last August 25, 2016. I kept my silence for the past 3 weeks as I know beyond reasonable doubt that I am not guilty of this allegation,” said Espino on Tuesday, September 27.

He read a prepared statement to reporters in his office at the House of Representatives, but refused to entertain questions.

Espino’s name was included in a drug matrix Duterte earlier publicized to support his allegation that former justice secretary and now Senator Leila De Lima was involved in the proliferation of drugs inside the NBP – the subject of an ongoing congressional probe.

Apart from Espino and De Lima, the drug matrix included the names of Pangasinan Provincial Administrator Raffy Baraan, former Bureau of Corrections chief Franklin Bucayu, and Ronnie Dayan, De Lima’s bodyguard and driver with whom Duterte claims she had an illicit affair. Dayan is allegedly a bagman for De Lima as well.

On August 30, the President granted Espino’s request for a private meeting. Duterte promised him an “immediate, thorough investigation” of the drug matrix.

Nearly a month later, Duterte apologized to the Pangasinan officials implicated in the drug matrix, including Baraan and Pangasinan District Board Member Raul Sison, and said he was taking “full responsibility” for “being negligent in counterchecking.”

The Chief Executive maintained, however, that the Pangasinan officials were allegedly linked to black sand mining.

Espino thanked the President for clearing his name and for being a “true leader and a gentleman.”

“He has my highest esteem for the courageous and bold statement of apology on clearing my name, Raffy Baraan, and Raul Sison. Let me reassure the President of my sincere and relentless support of his anti-drug and peace and order campaign, which had always been my campaign message for the past 6 elections,” said Espino.