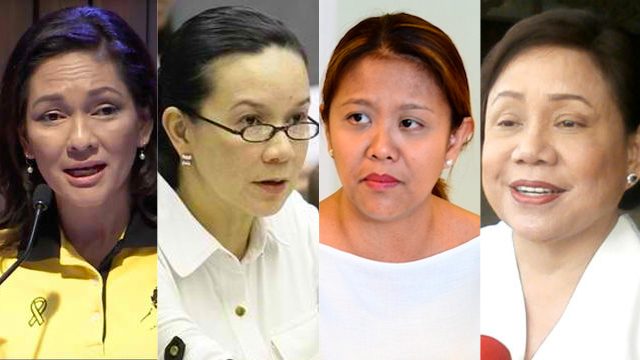 MANILA, Philippines (UPDATED) – Female colleagues of Senator Leila De Lima came to her defense amid the plan of some lawmakers and administration allies to show her alleged sex video at a congressional probe.

Senators Grace Poe, Nancy Binay, Cynthia Villar, and Risa Hontiveros all said it would serve no purpose to show the video.

Poe said it violates the law that both the House and the Senate passed – Republic Act 9995 or the Anti-Photo and Video Voyeurism Act of 2009.

“I have reservations about the legality of the playing of alleged sex video which will violate the very law that Congress passed,” Poe said in a text message.

Citing Section 4 of the law, Poe said the showing of photos, videos, or recordings of sexual acts or any similar activity via Internet, mobile phones, and other similar device is illegal.

“It will serve no legal and practical purpose as the law makes such unlawful act of showing inadmissible in evidence in any judicial, quasi judicial, legislative or administrative hearing or investigation,” Poe said.

De Lima herself earlier said that playing such videos, if they indeed do exist, at a House probe or before a court is against the law. (READ: De Lima: Aguirre’s evidence vs me ‘fake’ like his wig)

Calling the move “misogynistic,” Hontiveros said she could not see how the “fake video” would promote truth and justice in a congressional inquiry.

“It is terrible. I don’t see how the showing of fake sex videos will promote the interest of truth and justice. This is clearly a case of misogyny,” Hontiveros said in a text message.

Hontiveros even likened it to a situation where abused women find themselves in, when their partners blackmail them.

“This is no different from the abuse suffered by women who are being blackmailed by former husbands or partners who threaten to post their alleged sex videos on social media in order to shame them,”

Villar said the showing of the video would violate a woman’s rights and dignity, regardless if it’s De Lima or not.

“Regardless of the identity of the woman in the video, a woman’s dignity and the rights will be violated with the exhibition of the sex video,” she said.

Both Hontiveros and Villar called on the House of Representatives not to accommodate the supposed detestable plan.

“The House of Representatives must not entertain this contemptible proposal. To borrow a phrase, as for Senator Leila: I’m with her,” Hontiveros said.

“I implore upon our Honorable colleagues in Congress to proceed with decency and sympathy for women in dealing with this matter,” Villar said.

Binay, for her part, sympathized with the President’s fiercest critic. Binay said she knows how it feels to be in such situation, citing the year-long Senate probe against their family.

She said some attacks against De Lima are already out of bounds, such as the alleged sex video. It’s none of anyone’s business, she said, who De Lima’s partner is.

“Yung iba below the belt. Ano ba pakialam natin sa lovelife nya? (The other allegations are already below the belt. What do we care about her love life?)” Binay earlier said.

It’s been weeks of highly charged political drama in both chambers of Congress, with De Lima getting ousted as chairperson of the Senate committee on human rights and justice after she presented whistle-blower Edgar Matobato who linked the President to deaths in Davao; with the House presenting drug convicts and prisoners as witnesses to prove her alleged links to the illegal drug trade in the maximum security jail in New Bilibid Prison (NBP); and with administration officials dropping hints she was behind the bloody riot at the NBP on Wednesday, September 28, that killed one high-profile inmate and hurt 4 others, including one that the government is associating with the senator.

On Wednesday, Speaker Pantaleon Alvarez, President Rodrigo Duterte’s partymate in the PDP-Laban, said he saw nothing wrong with showing the alleged private video, as it would supposedly help prove the ties between De Lima and former driver Ronnie Dayan, who supposedly collected drug money inside the NBP for her.

It’s not clear if Pimentel has discussed this with Alvarez. He said Wednesday that House members should be ready to pay the “political price” should they push through with showing the alleged video.

No less than Duterte himself first divulged to the public the alleged private video of De Lima in August. The President has repeatedly mentioned this in his impromptu speeches, sometimes without naming De Lima but referring to her as an “X-rated actress.”

Duterte had said on Monday, September 26, that he could publicly release De Lima’s alleged video with a man, saying he may one day question her on who the guy is – Dayan or NBP inmate Jaybee Sebastian, who allegedly helped De Lima fund her 2016 senatorial campaign through collected drug money from within the prison. (READ: Duterte: De Lima will surely go to jail)

An exasperated De Lima asked the President to stop, wondering aloud about Duterte’s supposed “obsession” with her. (READ: De Lima to Duterte: ‘What do you want from me? Do you like me?’) – Rappler.com