Sep 29, 2016 12:14 AM PHT
Pia Ranada
Facebook Twitter Copy URL
Copied
After media insist on what they heard Duterte say, Yasay modifies his response and says he did not hear that particular statement from the President 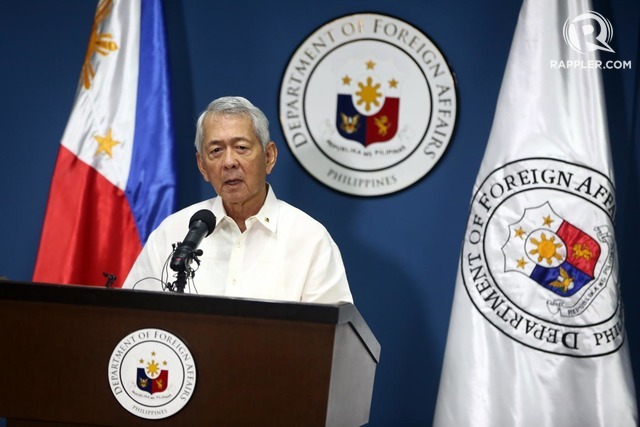 “No, no, no, he did not say that at all,” said Yasay on Wednesday night, September 28, after Duterte addressed hundreds of Vietnam-based Filipinos at the Intercontinental Hotel.

That night, Duterte, in a speech aired live on social media and television, had said: “You (US) are scheduled to hold war games again which China does not want. I will serve notice to you now, this will be the last military exercise.”

But Yasay insisted that Duterte was only repeating his earlier pronouncement that he would not let Philippine troops join joint patrols in the West Philippine Sea.

“What he said was that, as he said before, there will be no joint patrols with a grey ship of any nation in the South China Sea (West Philippine Sea) because that would be a provocative act,” said the Foreign Secretary.

WATCH: Foreign Sec Yasay insists to media Duterte did not mention last military exercise of PH and US troops pic.twitter.com/oz8XAINzvJ

Yasay reminded media that Duterte had also promised to respect treaties with the US and preserve military alliances with the Western superpower.

“But he said, he will continue to respect our treaty arrangements and commitments with the United Staes. He always says that,” emphasized Yasay, who spent years teaching in Washington D.C. prior to his appointment as Foreign Secretary.

Besieged by both Philippine and international media all insisting on Duterte’s mention of a “last military exercise,” Yasay continued to deny this and reminded journalists to take the President’s statements “in context.”

“No, no, no, no, I do not – You have to understand the President’s statements in the context of what he was saying,” said Yasay.

Later on in the chance interview, Yasay modified his response, from denying what Duterte said to saying he “did not hear” such a statement and therefore could not comment on it. – Rappler.com