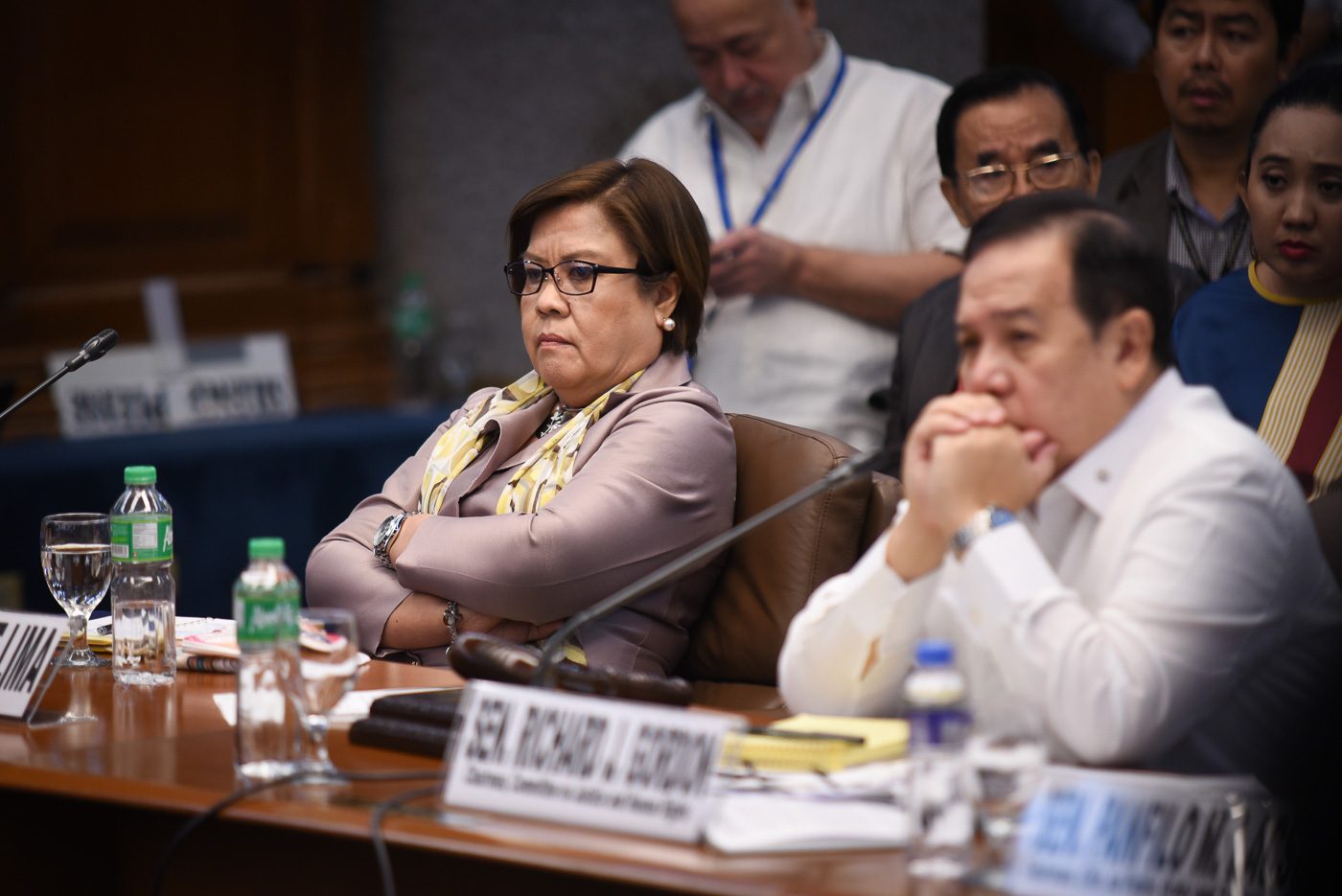 Facebook Twitter Copy URL
Copied
If Senator Richard Gordon pushes through with the complaint, it would be the 3rd filed against Senator Leila de Lima, President Rodrigo Duterte's fiercest critic

MANILA, Philippines – Will there be another ethics complaint against Senator Leila de Lima?

A day after the outrage on the Senate floor, Senator Richard Gordon said he is considering filing a complaint against De Lima for her alleged “unparliamentary” behavior during the Senate inquiry into extrajudicial killings on Monday, October 3.

These “unparliamentary” acts, Gordon said, include De Lima’s supposed withholding of information about witness Edgar Matobato and her “actuations” during the hearing.

If Gordon pushes through with the complaint, it would be the 3rd filed against De Lima, who is the fiercest critic of President Rodrigo Duterte. (READ: Ethics complaint vs De Lima? Issues of the ethics committee)

“Many members have said it should go to the ethics committee. I cannot let it pass eh because pinaghirapan namin ‘yan (because we worked hard to prepare for the hearing),” Gordon told reporters on Tuesday, October 4.

Gordon claimed De Lima damaged the Senate’s reputation. It was Gordon who replaced De Lima as Senate justice committee chairperson after the latter was ousted in an “unprecedented” move.

“The Senate’s reputation has been sullied. You invite all these people, make them wait 13 hours tapos mag-wa-walk out ka (and then you’ll just walk out). Tapos may shenanigans, di masisira reputation ng Senado (And then there are shenanigans which will destroy the reputation of the Senate),” Gordon said.

Gordon and De Lima had a heated exchange on Monday night after the former accused the latter of “material concealment” for supposedly hiding the kidnap-for-ransom case filed against Matobato. (READ: Senators gang up on De Lima over Matobato kidnap case)

The confrontation intensified when Gordon refused to apologize to De Lima, which led to her walkout.

Gordon is set to deliver a privilege speech on Wednesday, October 5, to condemn the acts of his colleagues De Lima and Antonio Trillanes IV.

But if De Lima apologizes, would he reconsider? Gordon said she should apologize to the Senate and not to him.

Even though De Lima and Trillanes presented transcripts of previous hearings, Gordon insisted that De Lima committed “material concealment.” This, he said, counts as an “unparliamentary act” and merits an ethics complaint.

De Lima and Trillanes had presented the transcripts of the September 15 and 22 hearings, where Matobato told Gordon himself that there was a kidnapping case filed against him before the National Bureau of Investigation.

Gordon admitted he is “partly” at fault for not remembering the exchange but he maintained he is still not buying it. Gordon then highlighted details of Matobato’s testimony, which he called “inconsistent.”

“That goes to character, you have information that this guy had a different set of accused people, that should have been made known to the committee,” he added.

Trillanes, for his part, slammed Gordon for “nitpicking” against De Lima, and said Gordon had been humiliated by the release of the transcripts.

(Now, he was presented truth, he let pride get in the way. His bias as chairman is showing. They looked for loopholes. Yesterday, we saw how humiliated they were that what they were talking about – that Matobato did not mention the kidnapping case – turned out to be in the transcript.)

He then urged Gordon to be a “man” and apologize to De Lima for his false accusations. Gordon refuses to do it, saying he did nothing wrong. – Rappler.com