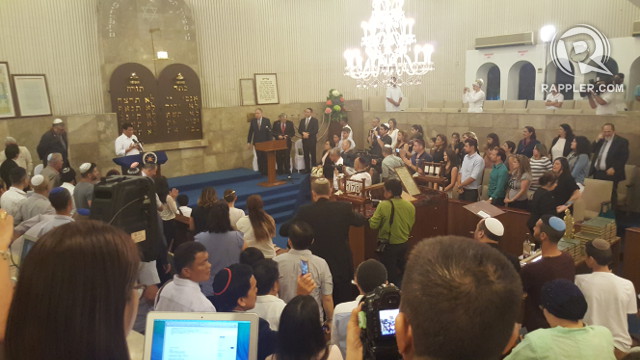 MANILA, Philippines – “Please accept my apology. It will never happen again,” said President Rodrigo Duterte to a gathering of Jews, prompting applause and even a standing ovation.

“That is why I am here, to say I’m sorry because I respect the Jewish people,” he said during his speech on Tuesday, October 4, during the Rosh Hashanah or the Jewish New Year celebration at the Beit Yaacov Synagogue in Makati.

Duterte said his controversial remarks comparing his drug war to Adolf Hitler’s extermination of the Jews was “not intended” and was just “a play of the tongue.”

“It was just a mental slip of the numbers of 3 [million] and Hitler’s [number]. It had nothing to do with the memory of the Jews because in my country we do not tinker with memories of our ancestors. It was just a play of the tongue,” he said.

Duterte had already given a public apology last October 2 after the remark sparked international outrage.

The Philippine President, known for his colorful threats and tirades against world leaders like US President Barack Obama and UN Secretary-General Ban Ki-moon, said the Jews never heard a word of insult from him before.

He even managed to establish a personal connection by saying he is connected to their people through his former wife, Elizabeth Zimmerman.

“For the life of me, you have never heard of a single word. As a matter of fact, my wife, Zimmerman, she was a descendant of an American Jew,” said Duterte.

The President, known for his extemporaneous speeches, admitted he had junked the prepared speech given to him for the Jewish event.

“I’m sorry, that’s why I did not read my speech because it does not show my emotion…It cannot transmit the emotions which I would like to give to you,” said Duterte to laughter from his audience.

But they laughed harder when he said he would only buy defense equipment from Israel, where many in the audience hail from, instead of the United States.

“In the matters, I said of arms, I said, ‘Do not buy from anyone except from Israel.’ Why? Because we have excellent relations and if you send us this gadget they will not include a bug there that for them to listen also to what we’re saying. If I get it from America, you are talking in secret – blah blah blah – and they are listening before you buy it,” said Duterte.

He even likened himself to longtime Israel Prime Minister Benjamin Netanyahu.

With a hint of admiration, Duterte said, “You have a President, Netanyahu. He does not even allow himself to be corrected in public.”

“America? He does not listen to America. ‘Just shut up, we have our own problem.’ But can they ever chastise Netanyahu? No, he will never allow it. Me, I will not,” he added.

Netanyahu is known to have strained ties with Obama.

Paul Rosenberg, president of the Jewish Association of the Philippines, said he found Duterte’s apology sincere.

Asked if he found the apology sufficient, he said: “What more can he do? You can’t do more than apologize.”

“[The apology] looked like it came from his heart. You don’t need a speech, so it was talking emotionally and it touched my heart. I believed it 100%,” he told Rappler.

Asked if he thought Duterte’s apology was enough, he said he thought so.

“Because he did not mean to say something bad and we believe in our friendship so I believe it was enough,” said Alkobi.

WATCH: Israeli Jew Itamar Gero on what he thought of #PresidentDuterte visiting his synagogue to apologize pic.twitter.com/Tf5IxU6zZy

Itamar Gero, an Israeli Jewish and a member of the Israel Chamber of Commerce of the Philippines, thinks Duterte’s remarks about Hitler may have been due to fatigue from his demanding schedule.

“I think to begin with he didn’t mean to offend. I think you know, you can just imagine the schedule of the President, flying around, conferences, different countries and then people are just asking you questions you have to answer, you’re not always at the top of your thoughts,” said Gero.

“Honestly, I didn’t feel like he was really after the Jews. Obviously, the guy is not a racist, I never heard of that sort before so there’s really no reason for him to start with the Jews,” said Gero.

After giving his speech, Duterte entertained requests for him to pose for photos with members of the Jewish community. – Rappler.com