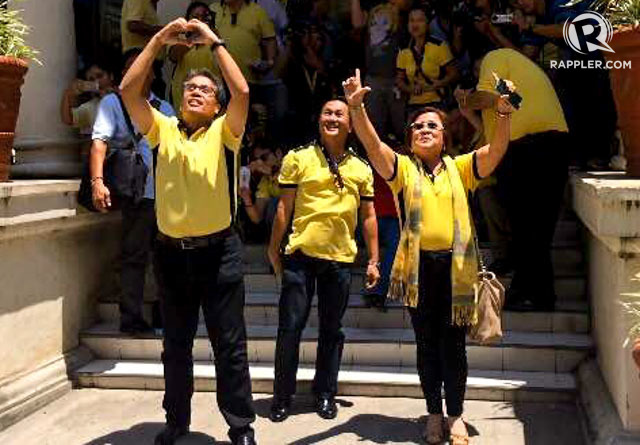 MANILA, Philippines – It was a problem waiting to rear its head. In May, there was a motion to prevent the proclamation of Leila de Lima as the last winning senator, but it was dismissed by the National Board of Canvassers.

This time, as the lady senators’ headaches are mounting – accusations of coddling drug lords, the circulation of an alleged sex video featuring her, and being kicked out as chair of the justice committee – her closest rival in the senatorial elections has filed an electoral protest.

Former Metro Manila Development Authority Chairman Francis Tolentino, who ranked 13th in the 2016 senatorial polls, wants to unseat De Lima, who won over him by around 1.3 million votes.

He accuses her, a former ally in the past administration, of poll fraud before the Senate Electoral Tribunal (SET).

“[The cheating] was with the electronic transmission. There probably was double transmission,” Tolentino said after the preliminary conference at the Supreme Court on Thursday, October 6.

Tolentino questioned why there was a huge difference between De Lima’s and his votes, when the lead of the 1st placer over the 12th placer was only 80,000 votes. (Franklin Drilon had a 148,169 lead over Joel Villanueva. – Editor)

In May, Tolentino failed to convince the SC to halt the proclamation of now senators Sherwin Gatchalian, Ralph Recto, and De Lima as the 10th, 11th and 12th placers, respectively.

De Lima and Tolentino were once allies in the Liberal Party (LP), after having both served in the administration of President Benigno Aquino III.

Tolentino was supposed to be part of then ruling LP’s senatorial ticket. He, however, quit after a lewd performance at an LP event in Laguna was associated with him. The emcee said the performance was “a gift” from Tolentino. (READ: Tolentino and LP: A graceful exit)

Tolentino eventually decided to run as an independent, a bid that was later supported by Duterte.

Duterte, in one of his public lashing out against De Lima over her alleged links to drugs, revealed that the senator had an alleged lover – Warren Cristobal, a former officer of the Metropolitan Manila Development Authority. The President said this was confirmed by Tolentino, who used to chair the MMDA.

De Lima has responded to Tolentino’s petition, saying she has no resources to fund her campaign, much less to spend on special operations. Tolentino questioned this.

“That’s not true because she reportedly had drug money that fueled her campaign. There should really be no narco money involved in elections,” he said, echoing the accusations that Duterte has made against the senator.

Drilon and Trillanes are allies of De Lima, while Gordon was involved in a heated word war with her, even threatening to file an ethics complaint against her. Villar is the mother of Duterte’s secretary of public works and highways.

Of the 6 senators, only Drilon and Trillanes did not vote for De Lima’s ouster as chairperson of the committee on justice and human rights, which had led the probe into the spate of extrajudicial killings under Duterte. – Rappler.com