De Lima: Convicted cop who testified against me is Duterte kin 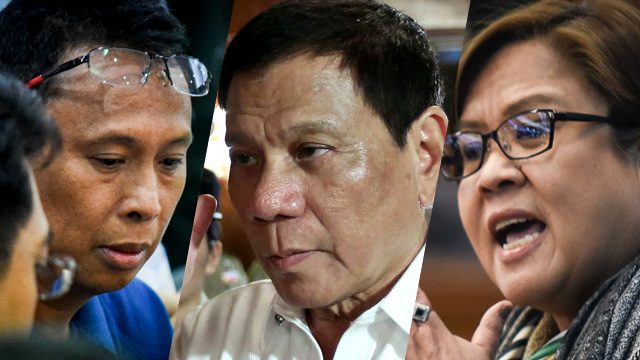 MANILA, Philippines – Senator Leila De Lima on Saturday, October 8, said that the claims of a convicted police official over her alleged involvement in the drug trade inside the New Bilibid Prison (NBP) were “all lies,” and that he is allegedly related to President Rodrigo Duterte.

In an interview during the “Misa Para sa Katotohanan at Katarungan (mass for truth and justice),” the neophyte senator said that Police Officer 3 Engelberto Durano, who she has never met, was also corrupt.

“I have not seen him, I have not met him…” she said. “Pero meron ngang nagbigay sa akin ng impormasyon na ito daw dating pulis ay corrupt daw po yan. Tiga-Danao City daw po yan at kamag-anak daw po yan ni Pangulong Duterte (I have received information that this former police is corrupt. He’s allegedly from Danao City and is a relative of President Duterte).”

The former police officer, who is serving time inside NBP over illegal drugs, narrated that Diaz ordered him to hand over the amount to former justice secretary De Lima. He, however, had to borrow more money first from a certain Noel Martinez since he only had P500,000 ($10,367) on hand.

Durano’s statements are just one of the many testimonies over De Lima’s alleged involvement in illegal drug trade and links to drug personalities inside the state penitentiary. (READ: The public trial of Leila De Lima)

The senator, however, repeatedly emphasized that there is no truth in the claims against her adding that the hearings are “definitely in aid of demolition or destruction” of her reputation.

(What they want is to slowly destroy me in the eyes of the public. They’re destroying my credibility because they think that that the moment they succeed, people will no longer believe in the things I fight for such as human rights and being against extrajudicial killings. That’s why they do this.) – Rappler.com