Oct 11, 2016 10:33 AM PHT
Rappler.com
Facebook Twitter Copy URL
Copied
(UPDATED) Based on a Social Weather Stations poll conducted in late September, 83% of Filipinos have 'much trust' in President Rodrigo Duterte, 8% have 'little trust' in him, and 9% are undecided 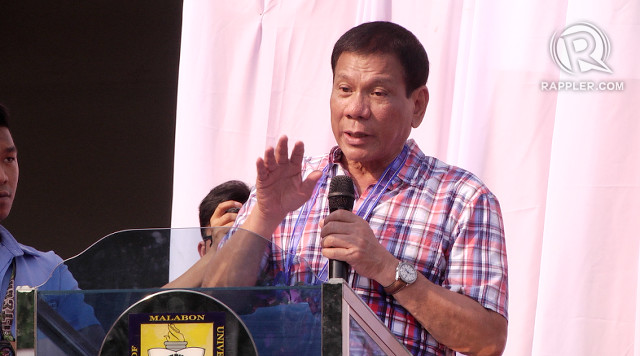 MANILA, Philippines (UPDATED) – Most Filipinos trust President Rodrigo Duterte, according to a September poll conducted by the Social Weather Stations (SWS), which revealed that the country’s chief executive received a net trust rating of an “excellent” +76.

According to the poll results, released on Tuesday, October 11, and first published by BusinessWorld, 83% of the respondents have “much trust” in Duterte, 8% have “little trust” in him, and 9% are undecided.

This is statistically unchanged from his +79 net trust rating in a June SWS poll, considering the poll’s 3-percentage-point error margin.

The survey among 1,200 Filipinos was conducted during the President’s 3rd month in office, September 24-27, after international criticism on his war on drugs prompted Duterte  to hurl invectives against the United States, the European Union, the United Nations, US President Barack Obama, and UN Secretary General Ban Ki-moon, among others.

Duterte’s war on drugs has been linked to the deaths of more than 3,000 people with alleged ties to the illegal drugs trade.

During and before the survey period, Duterte signaled his desire to distance the Philippines from its oldest, most powerful ally, the US, and to build closer relations with China and Russia. (READ: Duterte attacks US, praises China in Indonesia)

The survey period did not cover his controversial reference to Adolf Hitler vis-á-vis his war on drugs, which drew international outrage and prompted the President to apologize to the Jewish community.

Duterte’s net trust rating is higher than the rating of former president Benigno Aquino III during the same period. Aquino enjoyed a “very good” +67 after nearly 3 months in office.

SWS earlier released the results of a survey showing that Duterte had a “very good” +64 net satisfaction rating as he entered his 100th day in office.

The outcome “will further motivate his administration to continue what he started in his first 100 days – fighting illegal drugs and crime, combating terrorism, curbing corruption, and sustaining the momentum of economic growth,” said Andanar.

The survey shows Duterte is highly trusted across geographical areas, genders, and ages.

No conclusions can be made about these movements based on socio-economic classes because of the small number of respondents. The biggest chunk of the population belong to Class D. – Rappler.com