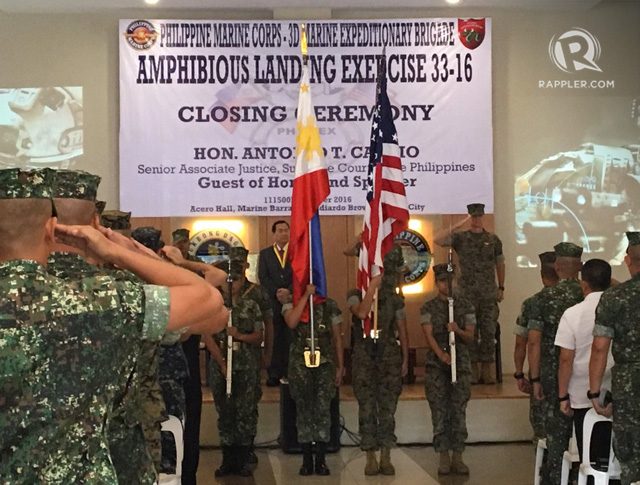 MANILA, Philippines (Updated) – One of the legal luminaries who led Manila’s successful case against Beijing’s maritime claims said President Rodrigo Duterte should be made to understand the necessity of sending patrols to protect the country’s exclusive economic zone (EEZ) in the West Philippine Sea (South China Sea).

Supreme Court Senior Associate Justice Antonio Carpio was the suprise guest of honor on Tuesday, October 11, at the closing ceremony of the Philippine-US Amphibious Landing Exercises (Phiblex) between the Philippines and its treaty ally the United States.

“We have to send patrols to our EEZ,” Carpio told an audience of Filipino and American marines who participated in the war games that Duterte said will be the “last” between the two militaries.

“It is important for naval powers to assert freedom of navigation in the area,” Carpio added.

Duterte said he wants joint patrols in the disputed waters stopped. Speaking to reporters after his speech, Carpio said it must be explained to the president that the patrols must continue.

“The only way to protect that is to send patrol ships there because if a foreign fishing vesell will poach on our waters in the EEZ. The only way we can stop them is to have a patrol there. There is no other way,” Carpio added.

He said failing to patrol the EEZ endangers the Malampaya gas field, a vital energy source, located outside the country’s 12 nautical miles territorial waters. He said the country will also lose billions in pesos worth of fish to poachers. (READ: China reclamation poses P4.8 billion economic loss for PH)

“I think if you will explain properly, he will understand,” the justice said.

Duterte had also repeatedly threatened to cut ties with the US, but backtracked on Tuesday in a speech (READ: Duterte: I do not mean to cancel military alliances)

The Mutual Defense Treaty (MDT) binds the Philippines and the US to come to the aid of each other in the event of an attack to their sovereignty.

“There is only one power on earth that can stop the Chinese from poaching in our EEZ. That is the US,” said Carpio.

At the ceremony on Tuesday, Carpio presented maps of the West Philippine Sea, explaining to the marines the historic ruling on the Philippine’s historic case against China’s maritime claims. (READ: Top Philippine judge uses Chinese maps vs China and Ruling on PH-China case: What is at stake?)

“They must know the reason why they are fighting and why they are prepared to give up their lives,” Carpio told reporters.

The Philippine Marines are the ones manning the country’s naval posts in the West Philippine Sea. – Rappler.com