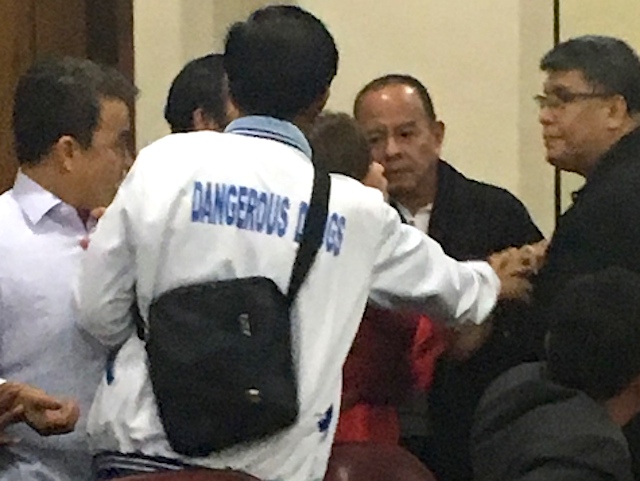 Tension between two lawmakers nearly turned into a brawl on Wednesday, October 12, as members of the House committee on constitutional amendments tried to resolve the issue of whether the panel should vote on recommending a Constituent Assembly (Con-Ass) or Constitutional Commission (Con-Com) to amend the Constitution.

Surigao del Sur First District Representative Prospero Pichay Jr argued that there is no mention of a Constituent Assembly in the Constitution “as far as direct amendment” is concerned.

“Any amendments of the Constitution will be proposed by the Congress upon vote of three-fourths of all its members. There is no mention of a Constituent Assembly here in the Constitution,” said Pichay.

He then suggested that the House pass a resolution inviting the upper chamber to decide on the matter.

Barbers responded: “Mr Chairman, let us not entertain these senseless motions. Those are stupid [motions].”

“Let us not pretend to be constitutionalists here,” he added, then walked away.

The hearing was suspended following the argument.

While the hearing was suspended, Barbers walked towards Pichay. Reporters covering the forum overheard the two congressmen hurl expletives at each other.

Barbers then pointed at the face of Pichay, who was seated. Pichay pushed away the other lawmaker’s hand, then stood up. Their colleagues quickly stood between them as they tried to push each other, and managed to break up the fight.

After the hearing, Barbers apologized for his actions, but not to Pichay. “To the public, I am sorry. What I did was uncalled for. Of course, it was just a verbal altercation. No physical brawl happened,” he said.

Pichay, for his part, said he will be filing a complaint against Barbers before the ethics committee.

“I don’t need his sorry. I will file actually sa ethics committee for conduct unbecoming. That is a behavior that should not be tolerated by the House leadership,” he said.

It was not the first time for the two lawmakers to get into a squabble. Back in 2005, Pichay moved to kick Barbers out of their party, the Lakas-Christian Muslim Democrats of then president Gloria Macapagal Arroyo, for backing the impeachment complaint against Arroyo. – Rappler.com