Duterte to meet with Emperor Akihito in Japan 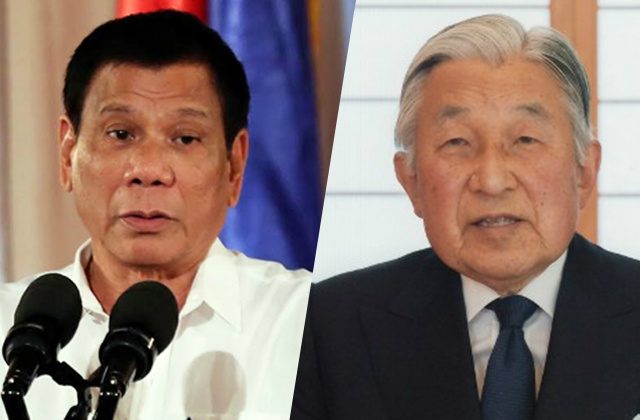 In a statement, the DFA said Duterte will visit Japan from October 25 to 27 “upon the invitation of Japanese Prime Minister Shinzo Abe.”

“During his visit, the President will meet with the Japanese Prime Minister. He will also make a State Call on His Majesty Emperor Akihito of Japan,” the DFA said.

Months later, in January this year, the Japanese emperor and empress also visited the Philippines.

The last known high-level meeting between the Philippines and Japan was in September, when Duterte and Abe met on the sidelines of the Association of Southeast Asian Nations Summit in Vientiane, Laos.

Back then, Abe praised Duterte and said he is “very famous” in Japan.

Duterte’s trip to Japan comes as he asserts an independent foreign policy that is distant from the US and closer to China and Russia. (READ: Why Duterte needs to act like a diplomat)

Japan is a US ally.  Like the Philippines, Japan also has a territorial dispute with China. – Rappler.com