De Lima: ‘I’m not a slut, I never betrayed my country’ 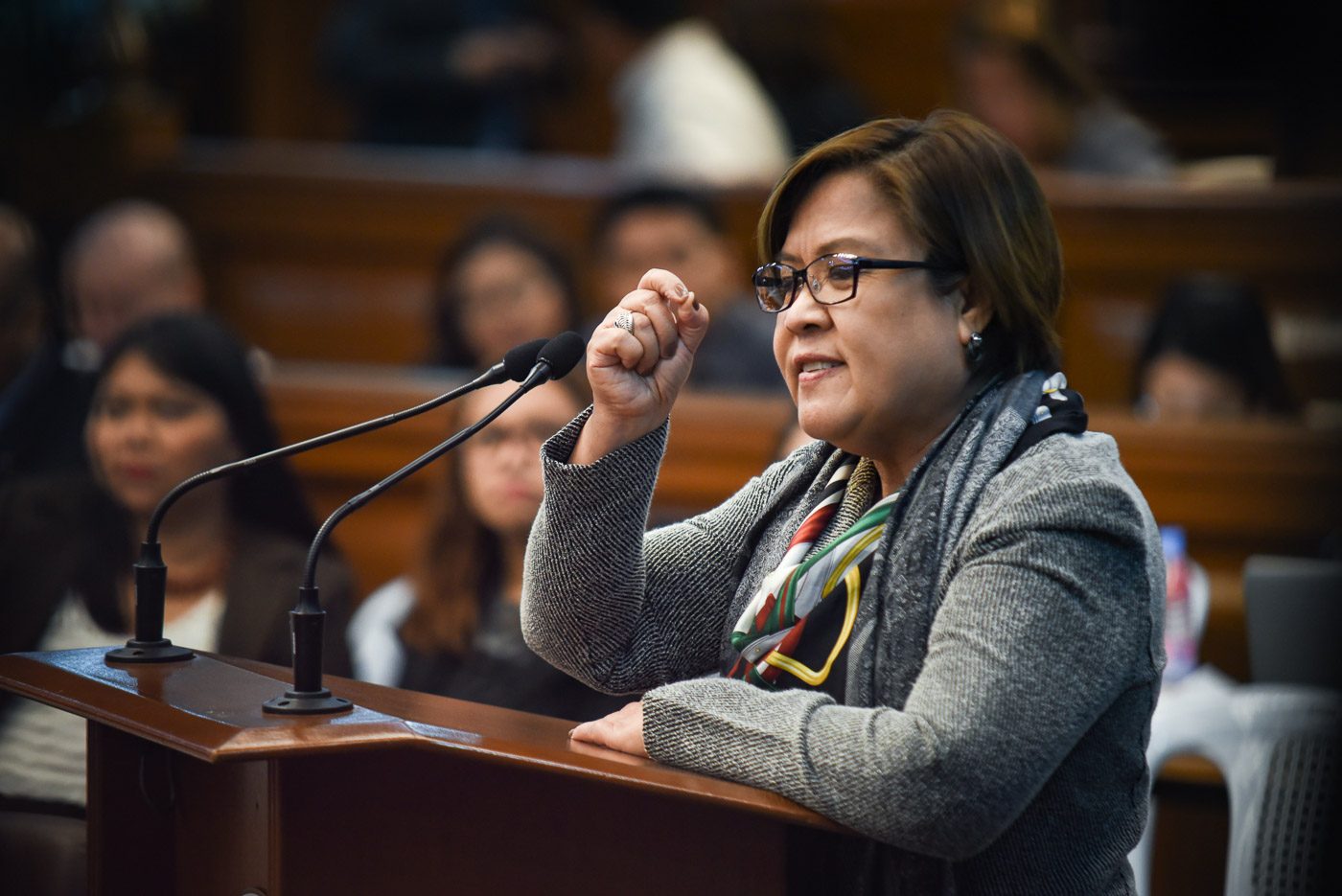 Facebook Twitter Copy URL
Copied
'Yes, I made mistakes and when I do make mistakes in my personal life, I pick up the pieces and move on. But never did I betray my country,' says embattled Senator Leila de Lima

MANILA, Philippines – “I am not a slut.”

Taking her fight again outside the Senate, Senator Leila de Lima made the prounouncement as she defended herself in public and hit back at President Rodrigo Duterte and his men for the “relentless and vicious” attacks against her and her character.

“I am not a bad and evil woman or a slut they are trying to portray the past few weeks. I have not partied with or slept with any drug convict,” De Lima said before students and faculty members at Miriam College in Quezon City.

De Lima admitted committing several mistakes in her personal life but none of these, she stressed, is tantamount to betrayal to the country.

“Yes, I made mistakes and when I do make mistakes in my personal life, I pick up the pieces and move on. But never did I betray my country,” De Lima said.

The senator, Duterte’s fiercest critic, lamented anew how the administration has repeatedly violated her right to privacy in the hopes of pinning her down, which intensified after she launched a Senate probe into the spate of extrajudicial killings since Duterte began his controversial war on drugs.

“Yes, as a human being, as a woman, I have frailties, I have weaknesses, I’ve certain flaws. As a woman, I made mistakes in my personal life. And I’ve always considered my personal life as a private matter. It’s a sacred thing to me but now they are intruding and encroaching into my privacy,” she said.

At the House inquiry into the drug trade at the New Bilibid Prison focused on the lady senator, De Lima’s address and mobile number were publicized, resulting in thousands text messages, calls, and death threats to her. (READ: For fear of life, De Lima moves to temporary home)

De Lima has been accused of having alleged illicit relationships with her former aides – Ronnie Dayan and Joenel Sanchez – who were also supposedly her bagmen. (READ: De Lima ‘revolted’ by ‘sex video’ talk at House probe)

No less than the President himself first brought to public curiosity the senator’s alleged private video, which was initially planned to be shown at the House probe, then scrapped because of public criticism against it, but still ended up being discussed in detail at the inquiry.

Duterte was the first to accuse De Lima of facilitating and benefiting from the illegal drug trade at Bilibid when she was justice secretary. (READ: The public trial of Leila de Lima)

In her speech, De Lima warned of a “creeping marginalization of women” and the rise of sexism in the country as the Duterte administration continued its “character assassination” against her.

She said this sexism “could very well overwhelm us before we know it,” adding another challenge for the nation is “old school misogyny” led by the President himself. (READ: Women’s groups back De Lima, hit Duterte’s ‘sexist harassment’)

“While being discriminated against or treated unfairly or disrespectfully simply by reason of one’s gender is still misogyny. Unfortunately that’s not the only way by which misogyny can rear its ugly head. The manner and not just the motive or reason can also make malicious and unfair treatment a case of misogyny,” De Lima said

“In my case obviously, I owe my predicament not to my gender but to my sheer audacity to do my job first as chairperson of the Commission on Human Rights (CHR) and thereafter, secretary of justice,” she said.

De Lima also took the chance to deny recent allegations of her involvement in the drug trade. (READ: Drug raps filed vs De Lima, 7 others)

“I am not the mother of all these drug lords,” De Lima said, in response to the drug trafficking complaint filed against her before the Department of Justice by former National Bureau of Investigation officials the day before.

She called these “unprecedented attacks to [her] person and credibility.”

“Their goal is to crush and break my spirit so no one would listen to me anymore. Our democracy is in peril. That’s why I’m doing this,” she said.

De Lima said her participation in public engagements, such as the Miriam College event, is meant to allow her to give her side to the people.

“Halos walang nakikinig sa akin sa Senado (There are but few people who listen to me at the Senate), I might as well get out of the Senate halls and reach out to you in the hope that you would listen and open your minds,” she added. – Rappler.com