Oct 21, 2016 4:35 PM PHT
Rappler.com
Facebook Twitter Copy URL
Copied
The 2 countries agree to cooperate in a variety of areas, including the fight against illegal drugs, agriculture, and defense 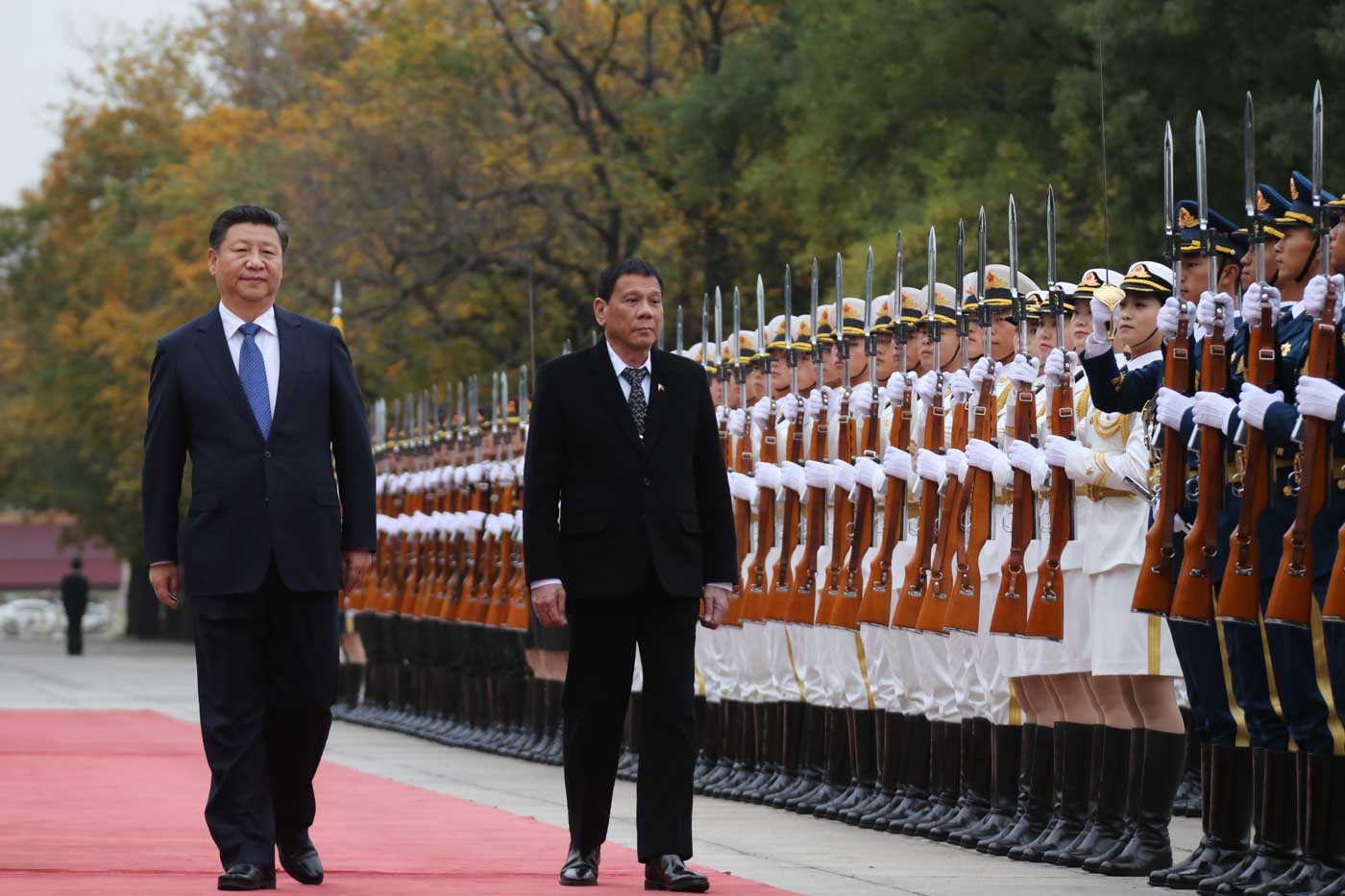 The document below was sent to media on Friday, October 21, a day after the bilateral meeting between Philippine President Rodrigo Duterte and Chinese President Xi Jinping in Beijing, China. The meeting took place during Duterte’s state visit to China.

4.        Both sides agree that since the establishment of diplomatic relations, Philippines-China relations have enjoyed smooth development and remarkable progress in many areas of cooperation which have benefited both countries and peoples.

8.        Both sides acknowledge the great importance of maintaining high-level exchanges in promoting the all-around development of bilateral relations.

9.        Both sides welcome the signing during the visit of various agreements and Memoranda of Understanding (MOU), as listed in the Annex.

10.     Both sides express interest in finalizing agreements and MOUs in such areas as education, finance, customs and sports.

12.     Both sides will encourage exchange of visits of high-ranking governmental delegations and leaders at the local level, legislative organs, political parties, and civil organizations, and increase interactions and communications.

13.     The Philippines welcomes China’s proposal to open a Consulate-General of the People’s Republic of China in Davao in due course. Proper arrangements for the diplomatic premises in both countries will be made in the spirit of the 1975 Joint Communique, on the basis of international practice and reciprocity, with priority for the most immediate concerns.

16.     China understands and supports Philippine Government’s efforts in fighting against illicit drugs. Realizing that the problem of illicit drugs poses severe threats to the health, safety and welfare of the peoples of both countries, both sides agree to enhance exchange of intelligence, know-how and technology sharing on fighting against drug crimes, preventive education and rehabilitation facilities.

17.     To further strengthen the efforts to fight against illicit drugs, both sides agree to establish operation mechanism for joint investigation on special cases and intelligence collection purposes. The Philippines thanks China for its offer of assistance in personnel training and donation of drug detection, seizure, and testing equipment to aid in the fight against illicit drugs.

18.     Both sides commit to enhance cooperation between their respective Coast Guards, to address maritime emergency incidents, as well as humanitarian and environmental concerns in the South China Sea, such as safety of lives and property at sea and the protection and preservation of the marine environment, in accordance with universally recognized principles of international law including the 1982 UNCLOS.

19.     Both sides agree to continue discussions with a view to signing a bilateral agreement on Transfer of Sentenced Persons.

20.     Both sides agree that bilateral defense and military cooperation are important components of bilateral relations. To enhance mutual trust, both sides agree to implement the Philippines-China MOU on Defense Cooperation, through exchanges and cooperation in areas of humanitarian assistance and disaster alleviation and peacekeeping operations.

21.     Both sides agree that bilateral economic cooperation remains strong, but has room for growth. Both sides commit to enhance economic relations in the priority sectors of the two countries by leveraging their complementarity and continuously promoting trade, investment and economic cooperation, through the activities identified under the MOU on Strengthening Bilateral Trade, Investment and Economic Cooperation.

23.     Both sides identify poverty alleviation as their shared aspiration, and agree to exchange best practices and cooperate in projects in this regard.

25.     Both sides will develop financial cooperation including in areas such as concessional loans, preferential buyer’s credit, bonds issuance, loans, investments, securities, and others as mutually agreed upon including special loans for development. Both sides will strengthen cooperation in the Asian Infrastructure Investment Bank (AIIB) and other multilateral and regional development banks.

26.     Both sides express willingness to expand the local currency settlement of bilateral trade and investment, and to coordinate to actively promote the regional financial cooperation which includes the multilateralization of Chiang Mai Initiative (CMIM) and bilateral swap arrangements (BSA). China welcomes the interest of Bangko Sentral ng Pilipinas (BSP) in participating in the Chinese Interbank Bond Market.

28.     Both sides agree to strengthen cooperation on animal and plant inspection and quarantine. The Philippines welcomes China’s announcement to restore permits of relevant Philippine enterprises that export bananas and pineapples to China, and continue to import vapor heat treated mangoes which were packed in facilities that comply with standards set by China.

29.     Both sides will undertake joint efforts to promote cooperation in the fields of high quality hybrid rice seeds, agriculture infrastructure, agricultural machinery, further develop the role of the Sino-Phil Center for Agricultural Technology, and other mutually agreed upon areas. China commits support for the Philippines’ effort to improve its food production capacity, training of agricultural technical professionals, and agricultural and fisheries industry development and capacity building, subject to domestic laws.

30.     China expresses readiness to support Philippine requests for assistance under the framework of the ASEAN Plus Three Emergency Rice Reserve (APTERR) in times of emergency.

32.     Recognizing the growing two-way tourist arrivals in the past few years and noting momentum that will be driven by the “ASEAN-China Year of Tourism” in 2017, both sides agree to set the goal of intensifying tourism cooperation. Both sides will encourage their citizens to travel to each other’s country, explore the possible increase in capacity entitlements in air services, and encourage airlines to open new flights between Philippine cities, including Davao City and other cities in Visayas and Mindanao, and Chinese cities, which will contribute to the realization of this objective.

33.     Both sides encourage the universities of the two countries to promote meaningful exchanges in the field of research and innovation and to strengthen academic exchanges and the model of university-research-industry communications and cooperation. China expresses readiness to increase allocation of Chinese Government Scholarship for the Philippines in the areas of science, technology, engineering and mathematics.

34.     Both sides agree to encourage mutual visits of media personnel, exchange of media products, cooperation in facilities, technologies and training between Chinese media and Philippine media including the People’s Broadcasting Corporation. The competent media authority of China is willing to enhance exchanges and cooperation with the Presidential Communication Office of the Philippines.

35.     Both sides express interest in increasing twinning agreements between their cities and provinces, noting that these arrangements will encourage mutual understanding between their peoples and tap cooperation potentials at the local level.

36.     Both sides agree to cooperate in emergency assistance and disaster relief.

37.     Both sides reaffirm the importance of further implementing the “Executive Program of Cultural Agreement between the Philippines and China, 2015-2018” and encouraged their cultural institutions and groups to increase exchange of visits. Both sides will positively consider setting up their respective culture centers in each other’s country.

38.     Both sides attach importance to people-to-people exchanges between the two countries, noting that 2017 marks 600 years of friendly contacts between the Sultanate of Sulu and China, and the Philippines and China expressed interest in holding relevant commemorative activities.

39.     Both sides will explore other areas of bilateral cooperation including in information technology, health, customs cooperation, research and development, education, and other fields that will be mutually beneficial to both countries.

40.     Both sides exchange views on issues regarding the South China Sea. Both sides affirm that contentious issues are not the sum total of the Philippines-China bilateral relationship. Both sides exchange views on the importance of handling the disputes in the South China Sea in an appropriate manner. Both sides also reaffirm the importance of maintaining and promoting peace and stability, freedom of navigation in and over-flight above the South China Sea, addressing their territorial and jurisdictional disputes by peaceful means, without resorting to the threat or use of force, through friendly consultations and negotiations by sovereign states directly concerned, in accordance with universally recognized principles of international law, including the Charter of the United Nations and the 1982 UNCLOS.

41.     Both sides recall the 2002 Declaration on the Conduct of Parties in the South China Sea (DOC) and the Joint Statement of the Foreign Ministers of ASEAN Member States and China on the Full and Effective Implementation of the DOC adopted in Vientiane on 25 July 2016. Both sides commit to the full and effective implementation of DOC in its entirety, and work substantively toward the early conclusion of a Code of Conduct in the South China Sea (COC) based on consensus.

42.     Both sides agree to continue discussions on confidence-building measures to increase mutual trust and confidence and to exercise self-restraint in the conduct of activities in the South China Sea that would complicate or escalate disputes and affect peace and stability. In this regard, in addition to and without prejudice to other mechanisms, a bilateral consultation mechanism can be useful, which will meet regularly on current and other issues of concern to either side on the South China Sea. Both sides also agree to explore other areas of cooperation.

43.     China expresses support for the Philippines’ chairmanship of ASEAN in 2017. Both sides express satisfaction with the growth of ASEAN-China Dialogue Relations over the past 25 years and affirmed their commitment to the principle of ASEAN centrality in the evolving regional architecture. China affirms support for ASEAN integration, ASEAN Community Building, as well as ASEAN’s efforts in realizing ASEAN 2025: Forging Ahead Together.

45.     Both sides reaffirm adherence to sovereign equality, non-intervention, and non-interference enshrined in the UN Charter and reiterate their common commitment for the protection and promotion of human rights through dialogue and cooperation in light of the core human rights instruments to which both countries are parties to.

2.        Memorandum of Understanding between the National Economic and Development Authority of the Republic of the Philippines and the National Development and Reform Commission of the People’s Republic of China for Developing Cooperation on Production Capacity and Investment

4.        Memorandum of Understanding between the Department of Trade and Industry of the Republic of the Philippines and the Ministry of Commerce of the Government of the People’s Republic of China on Strengthening Bilateral Trade, Investment and Economic Cooperation

5.        Memorandum of Understanding between the National Economic and Development Authority of the Republic of the Philippines and the Ministry of Commerce of the People’s Republic of China on Formulation of the Development Program for Economic Cooperation

6.        Memorandum of Understanding between the Department of Finance of the Republic of the Philippines and the Ministry of Commerce of the People’s Republic of China on Supporting the Conduct of Feasibility Studies for Major Projects

10.     Memorandum of Understanding between the Philippine Coast Guard and the China Coast Guard on the Establishment of a Joint Coast Guard Committee on Maritime Cooperation

11.     Implementation Program of the Memorandum of Understanding on Tourism Cooperation between the Department of Tourism of the Republic of the Philippines and the National Tourism Administration of the People’s Republic of China 2017-2022

12.     Protocol on Cooperation between the Philippines Drug Enforcement Agency and the Narcotics Control Bureau of the Ministry of Public Security of the People’s Republic of China; and

13.     Memorandum of Understanding on Financing Cooperation between the Export-Import Bank of China and the Government of the Republic of the Philippines, represented by the Department of Finance