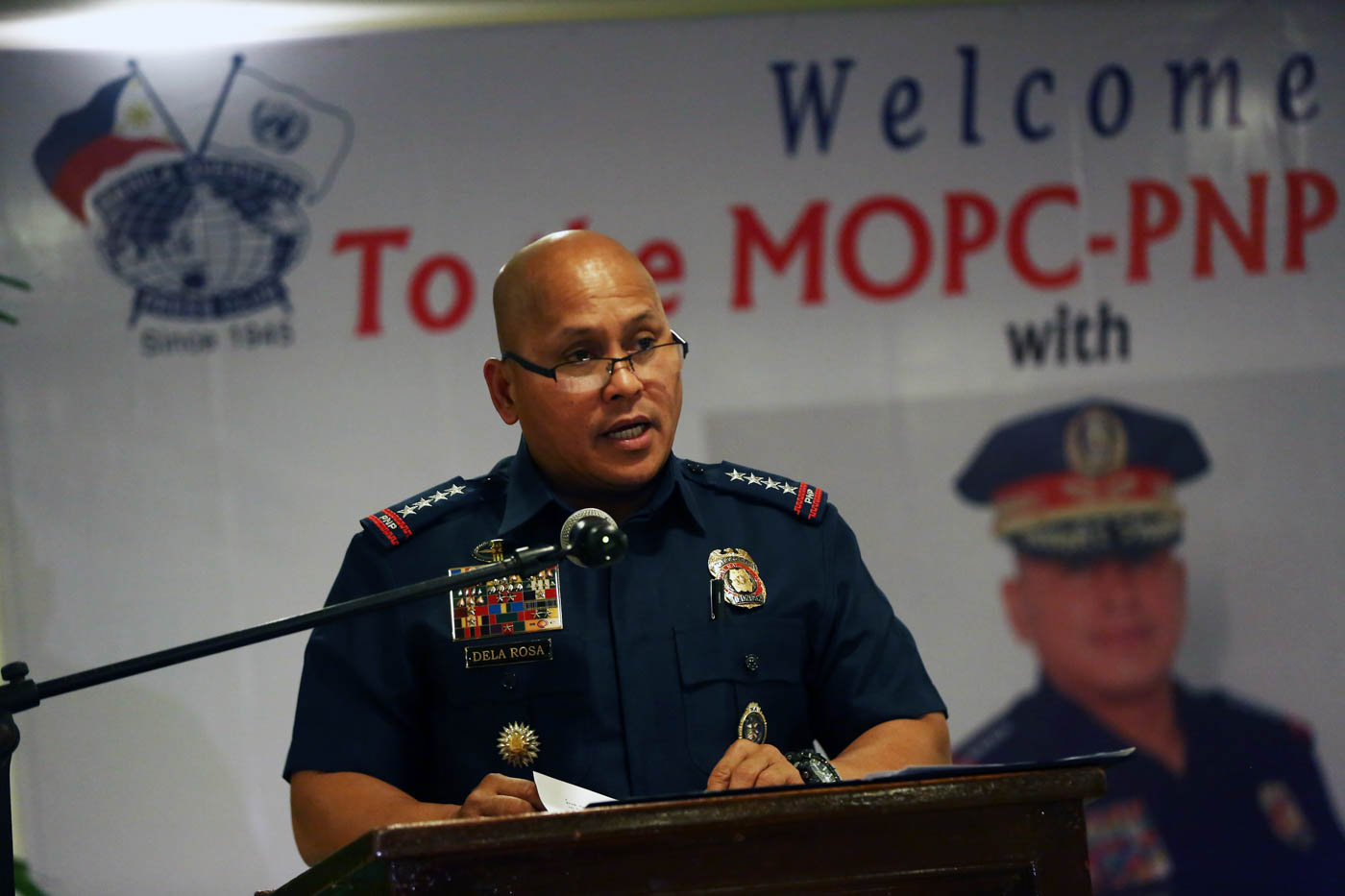 MANILA, Philippines – He once downplayed the end of a long-running training program between the Philippine and San Francisco police forces over the government’s “war on drugs,” but when it came to what might be a disrupted purchase of assault rifles, Philippine National Police (PNP) chief Director General Ronald dela Rosa had no qualms expressing his regret.

The United States State Department, according to a Reuters report, stopped the sale of over 26,000 assault rifles from the US to the PNP because a senator who belongs to the Senate Foreign Relations Committee “was reluctant for the United States to provide the weapons given concerns about human rights violations in the Philippines.”

Dela Rosa said he’s thinking of asking the foreign affairs department for help. But he will have to get clearance from President Rodrigo Duterte first.

“I will ask clearance from the President kung papayag siya na makiusap ako (if he agrees that we appeal to them) through the help of the DFA (Department of Foreign Affairs). Pero kung ayaw ng Presidente, wala tayong magagawa (But if the President doesn’t want this to happen, we can’t do anything about it).”

Dela Rosa said a failed sale would put the PNP at a disadvantage.

In the US, the State Department informs Congress in the event of international weapons sales. Reuters said the Senate Foreign Relations committee staff told the State Department of Senator Ben Cardin’s plan to oppose the deal during the prenotification process for the sale of the assault rifles.

The assault rifles were going to be purchased as part of the PNP’s Capability Enhancement Procurement (CEP) program for 2013, 2014, and 2015. But InTrade, the winning bidder, only formally sealed the deal in July 2016.

Funds for the purchase of the rifles would have come from the budgets of 2013, 2014, and 2015 – crafted by the previous Aquino administration.

Dela Rosa said they would look at other sources of firearms – including those manufactured outside the US.

Former PNP chief Senator Panfilo Lacson, on the other hand, downplayed the effect of the Americans’ decision on the police force.

“There are tens of other countries that manufacture better and probably cheaper assault rifles than the US,” he said.

The thwarting of the PNP’s plans to purchase the US-made firearms comes amid Duterte’s apparent “pivot” to China and repeated pronouncements of a desire to craft a foreign policy independent of the United States, a long-time ally.

Dela Rosa joined Duterte’s trip to China and even brought home 115 pieces of equipment, including protective vests and surveillance tools.

In the past few months, Duterte has launched verbal tirades against the US, criticizing it for its supposed hypocrisy. (READ: Duterte to Obama: Go to hell)

US officials have expressed concern over Duterte’s bloody “war on drugs” that has been blamed for the deaths of over 4,700 people.

Dela Rosa has insisted that ties between Philippine police and the US would remain unchanged. The PNP receives from the US training grants, equipment, and intelligence. – Rappler.com