Nov 3, 2016 6:33 PM PHT
Facebook Twitter Copy URL
Copied
The MNLF leader makes the allegations against Malaysia before President Rodrigo Duterte and his Cabinet in Malacañang, a week before the President's visit to Malaysia 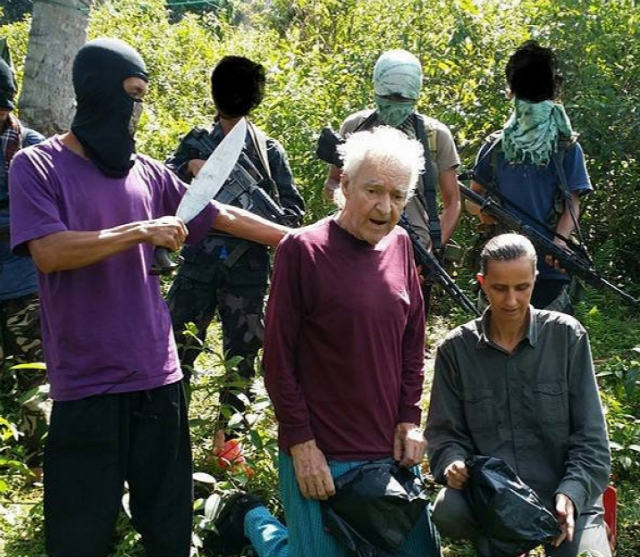 MANILA, Philippines – Moro National Liberation Front (MNLF) leader Nur Misuari resurfaced in the national scene on Thursday, November 3, bearing allegations against Malaysia, the facilitator of the peace process that he is expected to join.

Misuari claimed Malaysia is behind the kidnap-for-ransom activities in Sulu, particularly citing the 2000 Sipadan kidnappings attributed by Philippine authorities to the Abu Sayyaf Group. He even threatened to bring the case before the International Criminal Court (ICC).

“Malaysia is involved in this kidnapping for ransom. Probably one day, I will drag their leaders to the ICC. I have all the evidence in my hands,” Misuari claimed in a speech at Malacañang’s Rizal Ceremonial Hall Thursday afternoon, November 3.

“They are hiring my own people. Even Sipadan, they hired my cadre officers.They offered them millions,” Misuari alleged.

In 2000, the Abu Sayyaf, blamed for the worst terror attacks in the Philippines, attacked a diving resort in Sabah to kidnap 21 individuals including 10 Malaysians, 9 Europeans, and two Filipinos. They were brought to Sulu, where they stayed for 5 months until ransom was paid.

The Sipadan incident placed the Abu Sayyaf in the international spotlight.

The Abu Sayyaf is also notorious for beheading hostages who are unable to pay ransom. The Philippine military has dismissed the Abu Sayyaf Group as a kidnap-for-ransom group that is devoid of the idealogies of its founders. But one of its leaders, Isnilon Hapilon, pledged allegiance to the Islamic State (IS) and has been tagged as the amir for Southeast Asia. (READ: 4 PH terror groups link up with pro-ISIS fighters in region)

Misuari made the allegations against Malaysia at a brief Palace event organized to mark his meeting with President Rodrigo Duterte, who had even let him use the presidential podium so the MNLF leader can give his “short talk.” Others in attendance are the Duterte Cabinet and members of the media.

Misuari’s rant against Malaysia comes a week before Duterte’s scheduled visit to that country. (READ: Duterte going to Malaysia to discuss piracy problem)

Duterte invited Misuari to Malacañang after a Pasig court ordered the temporary suspension of warrants of arrest against him. He is facing charges of rebellion and  crimes against humanity for his role in the September 2013 Zamboanga siege that killed over 200 people and displaced 24,000 families.

The BTC, to be created by executive order, will revise a law creating a new Bangsamoro region that will replace the existing Autonomous Region in Muslim Mindanao (ARMM).

Duterte said he supports the creation of the Bangsamoro region, but the proposed law has to be revised to be “inclusive” of all interest groups such as the MNLF.

In Malacañang, Misuari said he refused repeated requests from the peace facilitator, Malaysia, for a meeting. “I don’t have the heart to see these people after they make a conspiracy to destroy the honor and integrity of my people,” he said.

Misuari also lamented how, in a press conference in Malaysia, a foreign reporter chastised him for the Sipadan kidnappings.

“One German lady stood up and pointed a finger at my face. ‘You know, governor, your people are the worst in the world.’ News on Sipadan had just broken in the world media,” Misuari narrated in Malacañang. – Rappler.com