New U.S. ambassador to the Philippines sworn in

Nov 4, 2016 7:39 AM PHT
Paterno Esmaquel II
Facebook Twitter Copy URL
Copied
'There is no one better qualified than Sung Kim...to be our ambassador to the Philippines at this point in time,' US Secretary of State John Kerry says 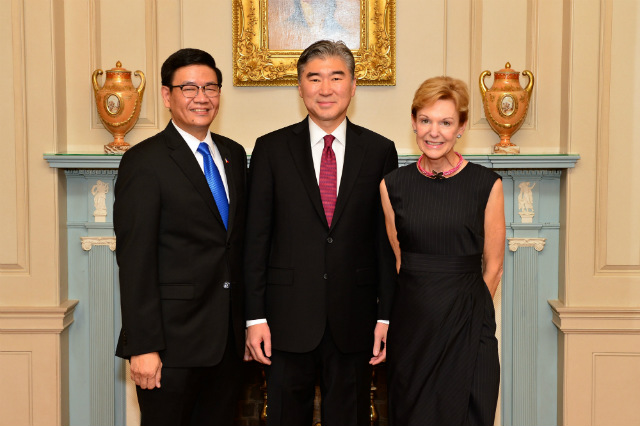 MANILA, Philippines – The new US ambassador to the Philippines, Korean-born Sung Kim, took his oath of office before US Secretary of State John Kerry shortly ahead of midnight on Friday, November 4, Philippine time.

He added: “I’m thrilled to have the honor of representing our country in the Philippines, our oldest ally in Asia and one of our most special friends anywhere. The US and the Philippines are and will continue to be close friends, partners, and allies.”

“This year, as we mark the 70th anniversary of formal US-Philippines relations, we celebrate and reaffirm our common history of shared sacrifice, values, and interests, and of course, an ironclad mutual defense treaty,” he said.

Kim previously served as special representative for North Korea policy and deputy assistant secretary in the Bureau of East Asia and Pacific Affairs at the US Department of State. He also worked as US ambassador to Korea from 2011 to 2014.

In the Philippines, he is replacing Ambassador Philip Goldberg, who is ending his tour of duty. (READ: US envoy leaving: ‘I’ve never met warmer people than in PH’)

‘One of our finest diplomats’

Kim is taking his post at a time when Philippine President Rodrigo Duterte launches consistent tirades against the US. Duterte, for one, calls Goldberg “gay” and denounces the US as “hypocritical” for meddling in domestic affairs.

Duterte, after all, vows to move away from Washington and closer to Beijing, America’s rival in the Asia Pacific.

In this context, Kim stressed in his speech on Thursday, November 3, that the US “has been among the Philippines’ top trading partners and its larger foreign investor.”  He said he looks forward “to continuing our robust economic engagement” and reinforcing efforts “to promote inclusive and sustainable economic growth.”

At the same time, he said, “I have to say as a longtime basketball fan, I’m particularly excited about our two people’s shared love for the most exciting game in sports.”

During Kim’s oath-taking, Kerry described Kim as “one of our most popular diplomats.”

“In Sung Kim, we will have one of our finest diplomats representing us in Manila…and a person known both for his talent and style,” Kerry said.

He added, “There is no one better qualified than Sung Kim to represent the United States of America and to be our ambassador to the Philippines at this point in time.” – Rappler.com