Facebook Twitter Copy URL
Copied
The Housing and Urban Development Coordinating Council reports that only around 4,000 families have occupied permanent housing as of September this year

As of September 30, 2016, said Robredo, the government has finished the construction of 29,661 houses while there are 20,287 partially-completed homes for the 205,000 families left homeless after Yolanda hit the country in November 2013.

However, only 4,278 houses have been occupied, which only accounts for 2% of the total needed housing. 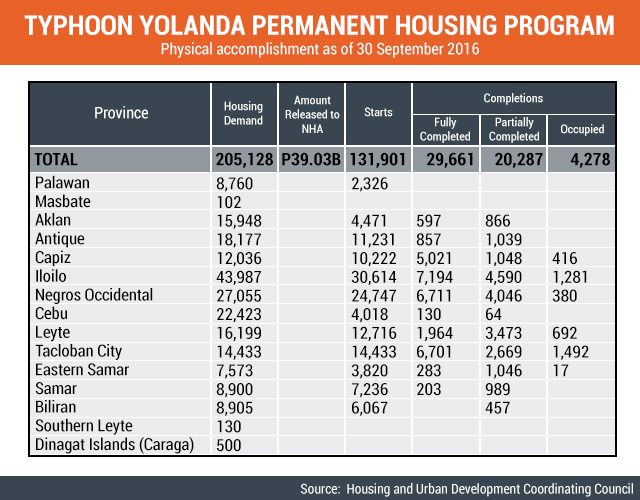 Among the problems identified by the HUDCC was lack of employment in the resettlement areas.

“The general complaint in Tacloban is that the relocation site was constructed in the north. It is quite far to the city center, so it is far from their source of livelihood. Their tendency is to just go back [to where they originally settled],” Robredo said in a press briefing a day ahead of the Yolanda anniversary on November 8.

Like in resettlement sites in Metro Manila and Bulacan, several units in Tacloban also do not have water and power sources.

To address these issues, HUDCC Director Paolo Salvoso said they will be convening the resettlement cluster for Yolanda rehabilitation, together with the Local Water Utilities Administration and the National Electrification Administration, on November 15.

Aside from faulty planning in the resettlement sites, the lengthy process for housing projects remains the major culprit for the delayed rehabilitation.

Recently, the Vice President signed a memorandum of agreement with the Bureau of Internal Revenue and the National Housing Authority to expedite the process of issuing a Certificate of Tax Exemption for socialized housing projects. (READ: Agencies sign deal to speed up housing for Yolanda victims)

Robredo said there is already a draft executive order from the Office of the President that allows the awarding of “rights-based security of tenure” documents rather than land titles to turn over public lands to intended beneficiaries of housing aid. (READ: Robredo cuts red tape in socialized housing projects)

The tedious land titling process, the Vice President earlier said, was hampering the construction of housing for disaster survivors.

The resettlement cluster will also create a task force that would monitor and work on Yolanda-related projects, as well as handle a digital platform for the rehabilitation.

“The Electronic Platform for Accountability and Transparency Hub for Yolanda (EMPATHY) is a centralized system to track the expenditures and progress of recovery and rehabilitation. It identifies choke points and what must be addressed by the resettlement cluster. It also provides real-time dashboard to HUDCC to expedite decision-making and execution of catch-up plan,” Salvoso explained.

Project EMPATHY was a project launched by the now-defunct Office of the Presidential Assistant for Rehabilitation and Recovery (OPARR) in partnership with the United Nations Development Programme (UNDP) and the United States Agency for International Development (USAID). – Rappler.com