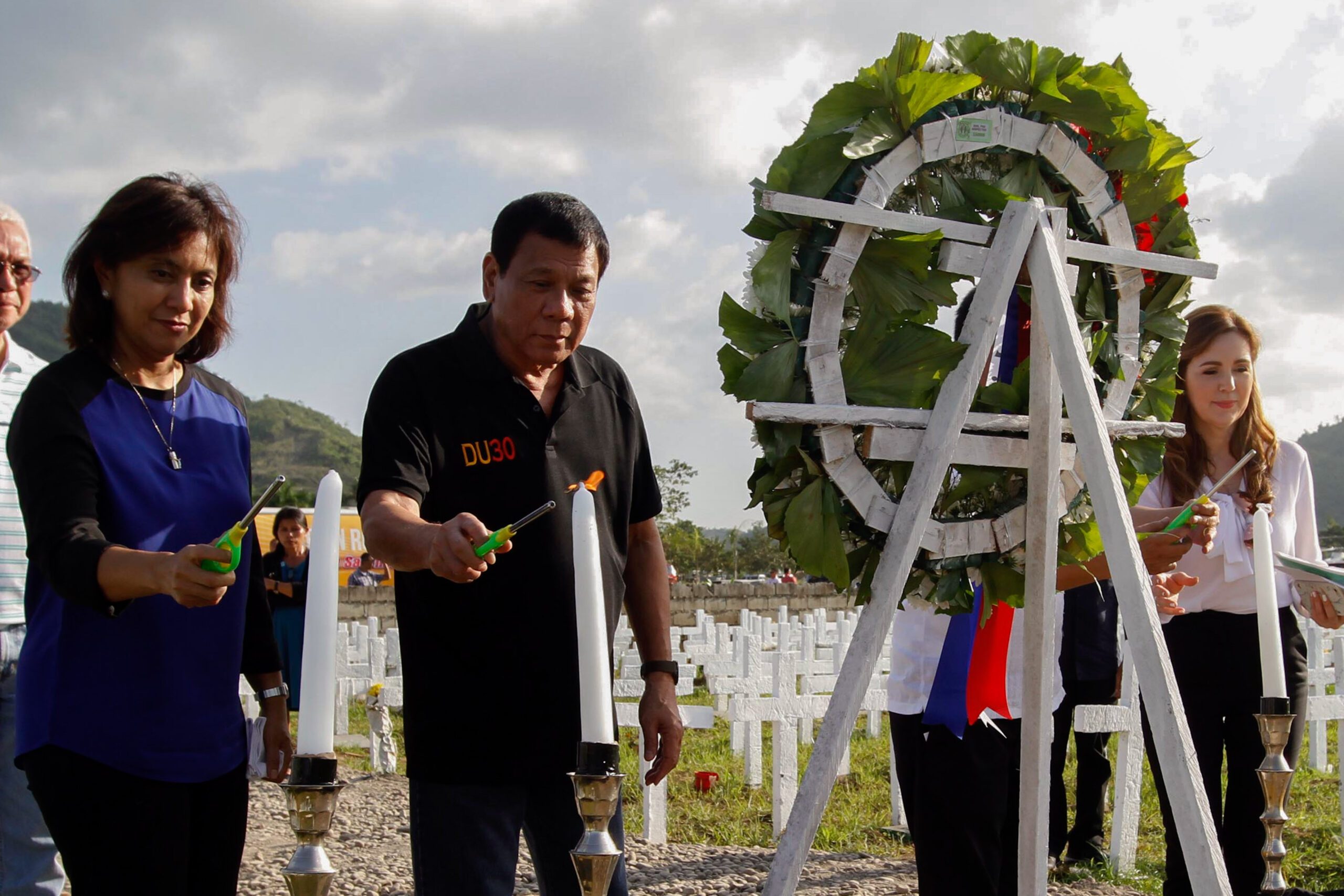 Facebook Twitter Copy URL
Copied
'Where she goes, I follow.... She's a widow. I'm annulled,' President Duterte says of the Vice President, his housing czar, to the delight of typhoon survivors in Tacloban

MANILA, Philippines – At the commemoration of Super Typhoon Yolanda (Haiyan) in Tacloban City on Tuesday, November 8, President Rodrigo Duterte managed to declare his admiration for Vice President Leni Robredo, even as he set deadlines for agencies involved in the rehabilitation of areas ravaged 3 years ago.

Speaking before survivors of the typhoon, Duterte joked that among the reasons he attended the event was because Robredo was there. The Vice President is his housing secretary. (READ: Robredo eyes completion of Yolanda housing by 2018)

The President, who has made no secret of his “admiration” for women, then began teasing the widowed Vice President over rumors that she had a boyfriend.

Robredo is the widow of former Interior Secretary Jesse Robredo, who was part of the previous administration’s Cabinet. Robredo is currently Duterte’s housing czar.

The Vice President was seen laughing and partly covering her face as Duterte made these remarks.

“Ganoon talaga si Ma’am Leni, binibiro ko ‘yan (I always tease Ma’am Leni). You know when the talks get boring and the arguments start, I always enter a joke,” said Duterte before he paused, seemingly to ask permission from Robredo.

(Ma’am Leni wore a dress that was shorter than usual. The protocol officers probably noticed I was always behind her. I told [Finance Secretary] Sonny Dominguez, “You’re too far, come closer. Check out her knees…” When Robredo noticed [she tried to cover her legs]. I wanted to tell her, “Ma’am why don’t you just wear shorts instead?”)

By the next meeting, Robredo had picked a different place to sit. “Wala nang view (I lost my view),” Duterte said. The President then sang the first line of “Malayo Ang Tingin“ by Anthony Costelo.

He then spoke again about housing and livelihood assistance for typhoon survivors.

Prior to talking about Robredo and their Cabinet meetings, Duterte made a pitch for federalism, among his key campaign promises. He reiterated his promise to step down “in 2 to 3 years’ time” if a federal form of government would be ready for implementation.

Getting used to Duterte’s jokes

It’s not the first time that Duterte made comments about Robredo’s looks.

During the campaign, he said he would appoint Robredo “assistant president” if they would both win because she was “beautiful.” Duterte and Robredo ran under different parties in the 2016 elections – Duterte under PDP-Laban and Robredo under the then-ruling Liberal Party.

In a speech at a military camp in August, Duterte admitted that he would “keep looking” at Robredo during Cabinet meetings. “You won’t listen to a female president, you will just stare at her because she’s beautiful.”

Although she’s a part of the Cabinet now, Duterte and Robredo’s working relationship had a seemingly rocky start.

A month before he was set to take his oath as president, Duterte said he had not offered Robredo a Cabinet post since he didn’t want to hurt the feelings of his friend, defeated vice presidential candidate Ferdinand Marcos Jr.

Marcos, whose mother Imelda hails from Tacloban, was on stage with Duterte and Robredo during the same Yolanda event.

(Actually, I’m starting to get used to the President teasing me. Like he said, that was…he was telling it as a joke. I’m getting used to his humor.)

On the campaign trail, Duterte had been criticized for his “misogynist” or “sexist” quips, apparently directed toward both friends and foes. – Rappler.com