Nov 9, 2016 11:17 AM PHT
Rappler.com
Facebook Twitter Copy URL
Copied
'Many were bothered and offended by it. As we all rightly should,' says the Vice President a day after President Duterte teased her about her short skirts 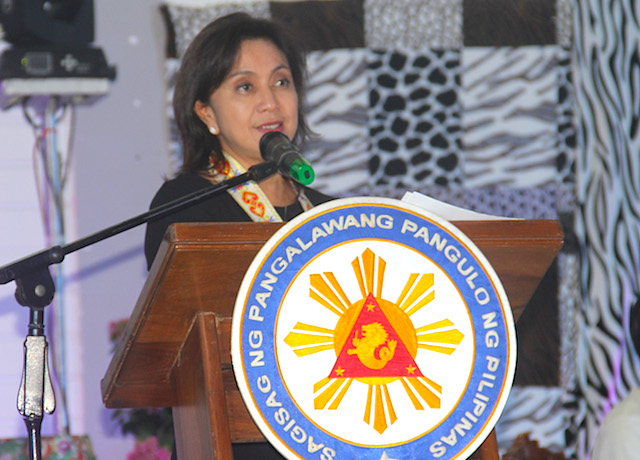 MANILA, Philippines – Vice President Leni Robredo on Wednesday, November 9, said she “deliberately chose to ignore” the remarks of President Rodrigo Duterte in a speech commemorating the 3rd year of Super Typhoon Yolanda, where he joked about her short skirts.

While in Tacloban with Robredo last Tuesday, November 8, Duterte managed to tease her before he talked about his rehabilitation plans for the city, noting that she’s a widow, that his marriage had been annulled, and that if rumors were true that she had a congressman-boyfriend that boyfriend would soon be dead.

(Ma’am Leni wore a dress that was shorter than usual. The protocol officers probably noticed I was always behind her. I told [Finance Secretary] Sonny Dominguez, “You’re too far, come closer. Check out her knees…” When Robredo noticed [she tried to cover her legs]. I wanted to tell her, “Ma’am why don’t you just wear shorts instead?”)

In a statement Wednesday, Robredo acknowledged that “many were bothered and offended” by what they saw on TV and online. She was seen laughing and partly covering her face as Duterte made those remarks.

“When President Duterte made inappropriate remarks, I deliberately chose to ignore these. There are larger and more urgent issues we confront as a nation that demand our collective attention,” she said. “But many were bothered and offended by it. As we all rightly should. Tasteless remarks and inappropriate advances against women should have no place in our society. We should expect that most of all from our leaders.”

The Vice President sought to reassure women that she remains committed to “fighting for the rights of women.” What happened, she said, “only strengthens my resolve to fulfill my mandate as the duly elected VP, who is determined to help alleviate poverty through building homes and communities.” – Rappler.com