Nov 9, 2016 1:05 PM PHT
Pia Ranada
Facebook Twitter Copy URL
Copied
'You want to depict me as bastos? You can. Have your day,' says President Rodrigo Duterte as he blasts the media for bringing up the 'trivial' issue 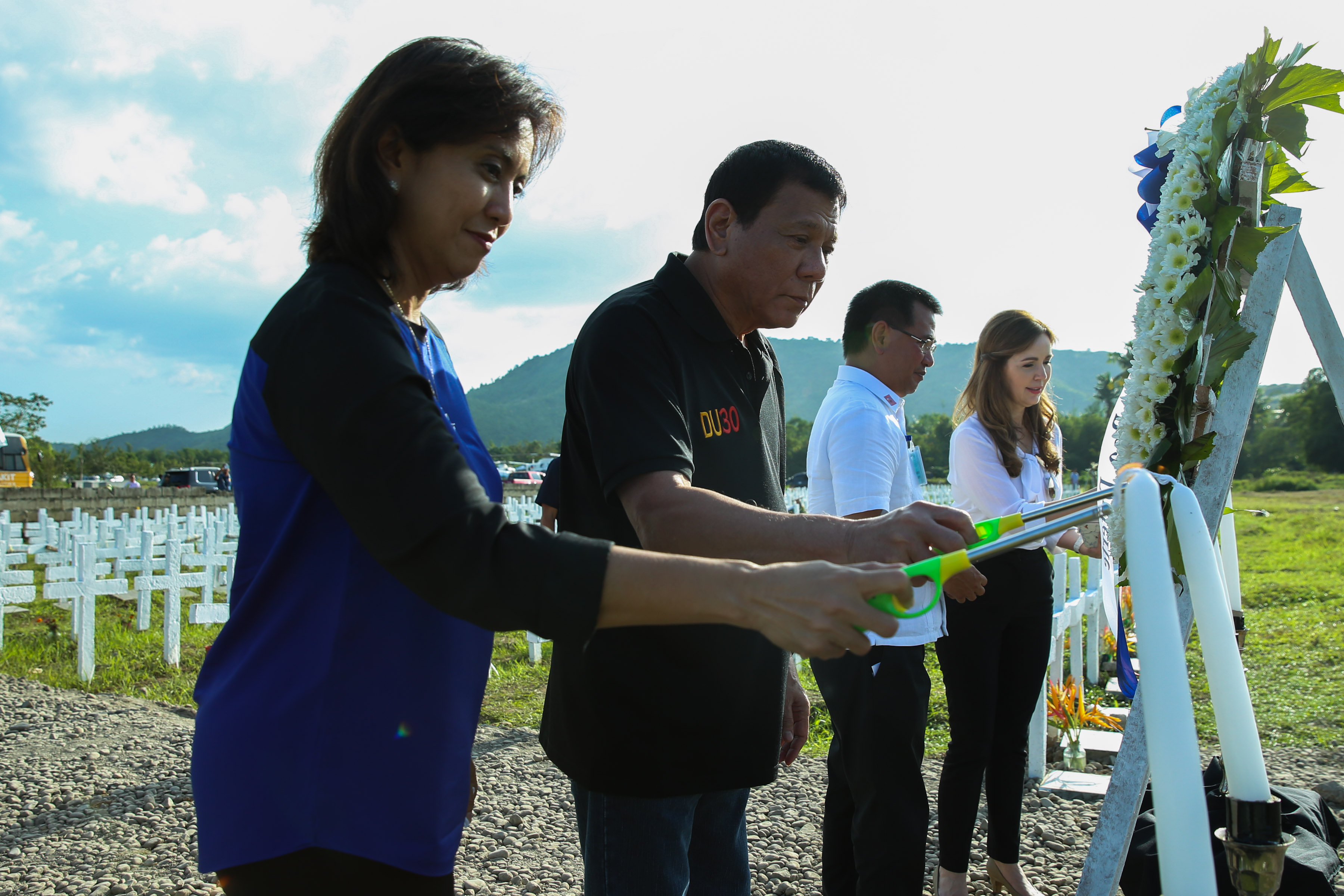 MANILA, Philippines – For President Rodrigo Duterte, there is nothing wrong about  commenting on the short skirt and knees of Vice President Leni Robredo during an event commemorating one of the most destructive storms in history.

Such comments, he said, are a “natural” part of being a politician.

“Yes, it is necessary, to make people laugh, for them to enjoy the occasion,” Duterte said at a news conference on Wednesday, November 9, before leaving for Thailand.

(Do not put a limitation or cast aspersions on my jokes because I am not a general, I am a politician, and it is natural for us to make people laugh especially after expressing anger.)

He said he wanted to diffuse the tension caused by his anger at the slow completion rate of housing projects for Super Typhoon Yolanda survivors.

There was nothing malicious about his remarks, claimed Duterte, because he was merely commenting on how Robredo’s smooth knees indicated she did not go to mass.

“Yeah, I said she was wearing a skirt, her tuhod (knee) was walang ano (had no calluses). Sabi ko, hindi nagsisimba ito (I said, this person doesn’t go to mass). It is appropriate; as a matter of fact, it is good,” said Duterte of his joke.

His remarks about Robredo’s shorter than usual skirt, even her status as a widow and rumors of her having a congressman-boyfriend, drew criticism for being sexist and disrespectful.

Robredo herself issued a statement describing Duterte’s remarks as “inappropriate” and “tasteless.”

But to Duterte, such remarks are only meant to “break the ice.” He even said he makes similar comments every Cabinet meeting.

“I said that every meeting. You ask all Cabinet members. Just to lighten the moment. What’s so special about the knee of a person?” he said.

The President said there is nothing wrong with jokes that do not go above a woman’s knee.

“Those jokes, that is nothing unless umakyat ka sa taas ng tuhod hanggang dito (you go above the knee, up to here) then that would be in extreme bad taste. So? What’s wrong with the knee of your wife?” a miffed Duterte asked the male journalist who had asked the question.

He then blasted the media for bringing up the “trivial” issue.

“You make a big issue about the tuhod (knee) – is that the trivialities of media? It’s so trivial. You want to depict me as bastos (disrespectful)? You can. Have your day,” said Duterte.

“Gusto mo siguro mag-akyat pa ako dito sa bugan (You probably wanted me to joke about her vagina),” he added, before abruptly ending the press conference.

The President has made similar teasing remarks about Robredo before, but they mostly focused on his appreciation for her beauty.

A self-confessed “womanizer,” Duterte has been known to whistle at female reporters he finds attractive and to call the attention of beautiful women he spots in a crowd. He also drew public outrage during the campaign when he made a rape joke involving a murdered Australian missionary in Davao City.

Duterte did not apologize for these jokes and comments, saying this was just how he spoke. He claimed these gestures were meant to endear him to his audience. – Rappler.com