Nov 9, 2016 7:28 PM PHT
Paterno Esmaquel II
Facebook Twitter Copy URL
Copied
'Marcos is no hero! He should not be presented as one,' the Catholic Bishops' Conference of the Philippines says 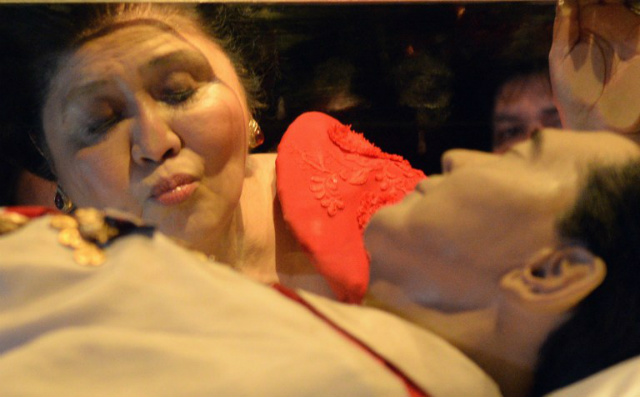 MANILA, Philippines – The Catholic Bishops’ Conference of the Philippines (CBCP) on Wednesday, November 9, condemned the Supreme Court (SC) ruling to allow a hero’s burial for the late dictator Ferdinand Marcos.

In a statement, the CBCP said it is “saddened by the decision of the Supreme Court to allow the burial of former president Marcos in the Libingan ng mga Bayani (Heroes’ Cemetery).”

“We see this as another step to build the culture of impunity in the country,” Lingayen-Dagupan Archbishop Socrates Villegas said in a statement signed on behalf of the CBCP.

The hero’s burial for Marcos was ordered by President Rodrigo Duterte, whom critics accuse of breeding a culture of impunity.

Duterte, an ally of the late dictator’s family, has urged the killing of drug suspects who resist arrest. Duterte’s war on drugs has killed at least 4,812 people since July 1, with 3,001 of them having been slain in extrajudicial or vigilante-style killings.

Human rights advocates have compared recent killings in the Philippines to the abuses during the Martial Law years under Marcos.

“Marcos is no hero! He should not be presented as one,” Villegas said.

Villegas is the protégé of the late Manila Archbishop Jaime Cardinal Sin, who helped oust Marcos through the EDSA People Power Revolution of 1986.

Villegas was the 25-year-old private secretary of Sin when Filipinos toppled Marcos and restored Philippine democracy. (READ: EDSA: ‘Hand of God’ seen from the House of Sin)

CBCP: ‘We do not forget’

In the CBCP statement that he signed, Villegas pointed out that Marcos “made many people suffer by arbitrary torture and death.” He also “deprived many poor people of their basic needs while his family and cronies were enriched.”

“We do not forget this! We will not allow that this be forgotten by the future generations in order that the same strong-hand oppression may not happen again,” he said.

“Those who do wrong should be made accountable,” he added.

Villegas then said the late dictator’s family and cronies should “admit the wrong they have done.” He also said victims of human rights abuses should be properly compensated.

“This is a matter of justice,” the archbishop said.

Villegas continued: “Burying Marcos in the Libingan ng mga Bayani will not bring peace and unity to the country. Peace can only come if there is justice.”

“Justice demands recognition of the harm done to the people and restitution to the victims,” he said.

He explained that the Church works for peace and unity “based on truth and justice for all, especially for the poor and the victims.”

Villegas ended the statement by saying that the CBCP is “very sad.”

Reiterating an earlier statement, Villegas said a hero’s burial for Marcos “is an insult to the EDSA spirit.” He added that it “mocks our fight to restore democracy.”

“It calls on us for greater courage to make the full truth of the dictatorship known,” Villegas said. “Yes, we do not forget and we will not forget!” – Rappler.com