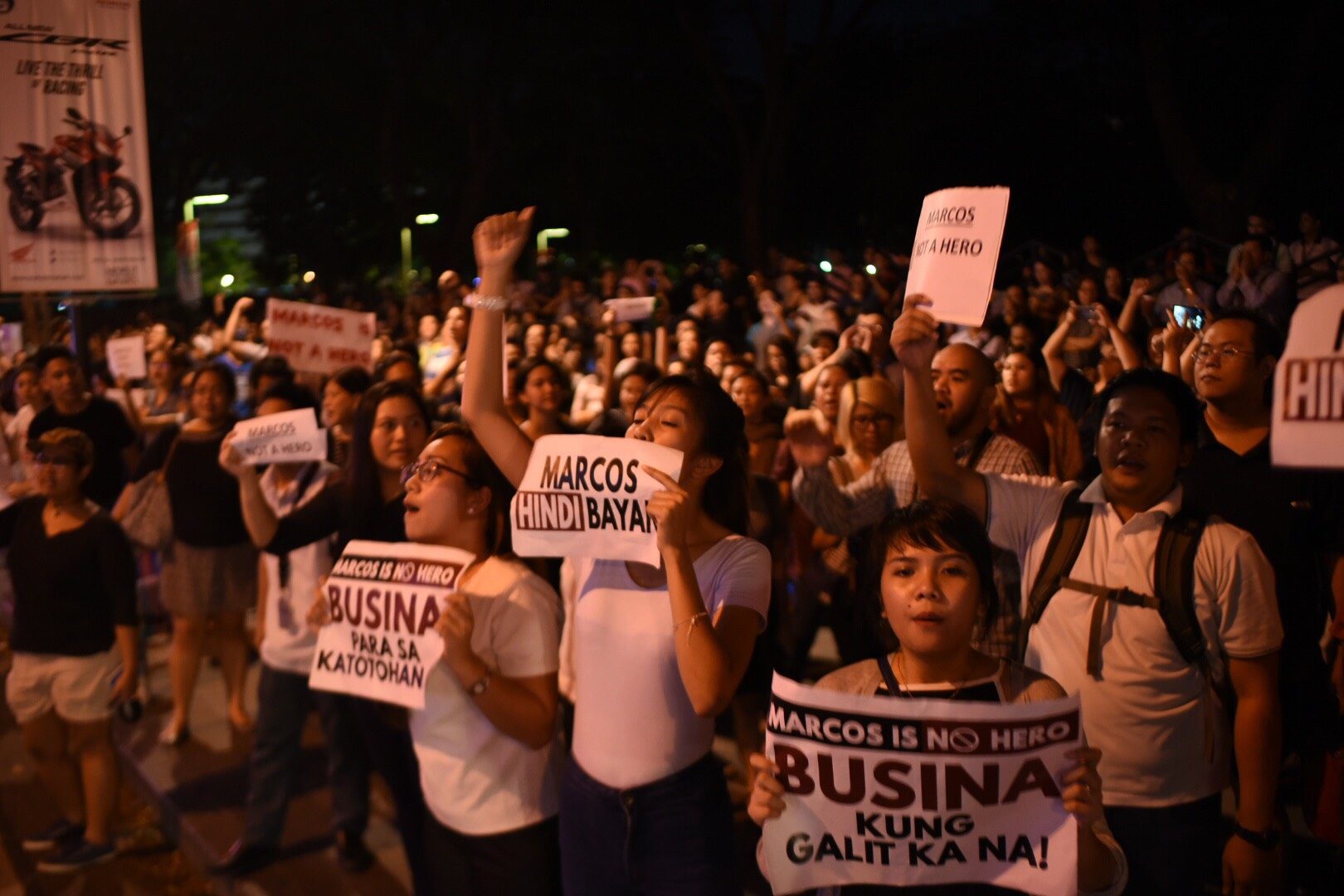 Facebook Twitter Copy URL
Copied
'Carmma is pushing to broaden the front because we think that the issue is shared by many sectors [and] institutions,' says anti-Marcos group spokesperson Bonifacio Ilagan

MANILA, Philippines – The Campaign Against the Return of the Marcoses to Malacañang (Carmma) are calling on various groups protesting former President Ferdinand Marcos’ burial at the Libingan ng mga Bayani to join their mass action on November 25.

Carmma spokesperson Bonifacio Ilagan, who is one of the petitioners in the case opposing the burial – the same case which the Supreme Court (SC) dismissed – said the grand rally will most likely be held at a big venue but not the Heroes’ Cemetery.

Ilagan added that they will still stage “unorthodox” or lightning rallies before the national shrine where Marcos was buried in a private ceremony on Friday, November 18. (READ: Youth leaders to Duterte: Shame on you for ‘cleaning Marcos’ image’)

The 800-strong-member coalition will coordinate with other sectoral groups such as religious congregations and schools to join their event and scale up the protest. Separate rallies were held in various parts of Metro Manila on Friday, following the unexpected burial rites for the late dictator. (READ: UP, Ateneo, Miriam flood Katipunan to protest Marcos burial)

“Carmma is pushing to broaden the front because we think that the issue is shared by many, many sectors [and] institutions,” he said.

Asked if these groups include Liberal Party-affiliated groups such as Akbayan, Bonifacio said it will be difficult since there are several issues being considered.

“There are a lot of issues considered, especially when establishing a relationship, because we [want to hold] LP accountable. We refer to the Noynoy (former President Benigno Aquino III) administration – that they were the previous leadership that should have done something [to prevent the Marcos burial] but did not do anything,” he said.

Carmma worked with the leftist group Bayan Muna in earlier efforts to block the Marcos burial.

Meanwhile, Akbayan-NCR was supposed to hold a rally in front of the national shrine on Saturday, November 19, but did not push through with it to avoid a clash with at least 2,000 Marcos supporters who traveled all the way from Ilocos Norte.

Another group against the Marcoses, the Coalition Against Marcos Burial at the Libingan ng mga Bayani (CAMB-LNMB), is currently mapping out its plans for the coming week.

Authorities said 500 protesters, reaching over 3,000 at its peak, gathered from Friday evening up until before dawn of Saturday at the People Power Monument to express their dismay at the Marcos family and President Rodrigo Duterte, who allowed the state interment. (READ: Post-Marcos burial rage: Rallies to go on until Nov 30)

Despite the significant turnout of participants in these rallies, the organizers have yet to draw up a concrete set of actions – whether or not these have anything to do with filing a motion before the Supreme Court that could result in an exhumation of Marcos’ remains. – Rappler.com