The meeting took place around 11:45 am on Saturday, November 19 (12:45 am, Sunday, November 20, Manila time) before the start of the APEC Economic Leaders’ Meeting.

Prior to his meeting with Putin, Duterte had a bilateral meeting with Chinese President Xi Jinping, where the Philippine leader again invited his Chinese counterpart to visit the Philippines at a “mutually agreeable date.” Previously, Xi already accepted Duterte’s invitation to visit.

When Duterte walked into the meeting room, Putin and his ministers were already there. 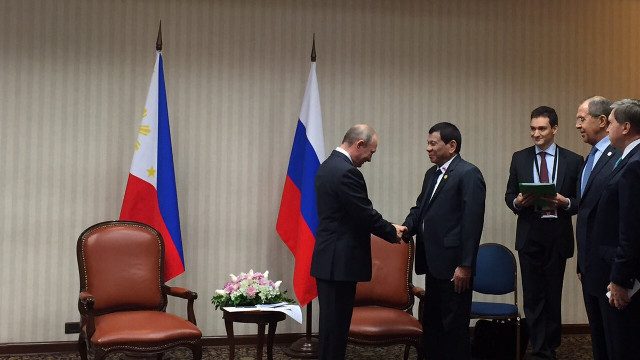 A smiling Putin extended his hand to shake Duterte’s hand. After exchanging pleasantries during their long handshake, Putin invited Duterte to take a seat.

Also present was Senate Alan Peter Cayetano, one of Duterte’s allies in Congress and his running mate during the 2016 elections.

In the part of the bilateral meeting that was open to coverage by Philippine media, Duterte told Putin:  “Of late, I see a lot of these Western nations bullying the small nations. And not only that, they are into so much hypocrisy. They seem to start a war but afraid to go to war.”

He added: “That’s what’s wrong with America and the others. Waging war in so many places, Vietnam, Afghanistan, and in Iraq and – for one simple reason there was a weapon of mass destruction, and there was none.”

Duterte also brought up his war on illegal drugs.

Putin, who had an interpreter, was seen listening intently to Duterte, with a small smile on his face. Putin personally congratulated Duterte for his “triumph” in the presidential election, and assured the Philippine leader that Russia looked forward to warmer ties with the Philippines.

Before his trip to Peru, Duterte was very open about his admiration for Putin, even calling him his “hero.”

He previously told reporters he was looking forward to his meeting with Putin.

On a lighter note, Duterte has said he is “similar” to Putin because of their shared passion for guns and women.

It is telling that in a summit attended by 21 heads of state, Duterte’s first bilateral meetings were with China and Russia.

Previously, he has said he would be the first to join a “new world order” created by the two countries, saying this would be preferable to the current world order dominated by the United States.

During his state visit to China last October, Duterte had also said, “There are 3 of us against the world – China, Philippines, Russia.” – Rappler.com