Taguiwalo: I will stay in Duterte Cabinet despite Marcos burial 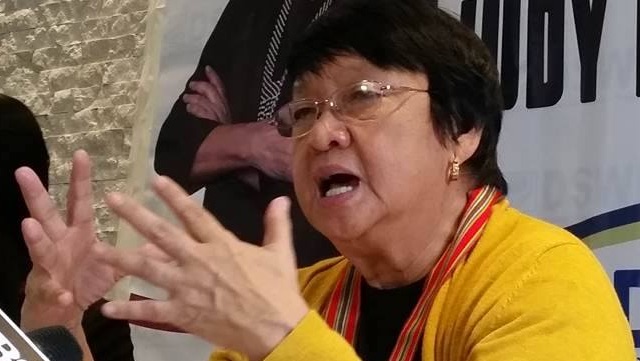 MANILA, Philippines – Social Welfare Secretary Judy Taguiwalo said that there are numerous reasons for her to remain in the Cabinet of President Rodrigo Duterte, despite him ordering the burial of former dictator Ferdinand Marcos at the Libingan ng mga Bayani – a move she has opposed.

“I am one with the Filipino people protesting the sudden and sneaky Marcos burial… I have said it before and I will say it again, Marcos is not and can never be a hero,” Taguiwalo, one of the numerous victims of Martial Law atrocities under Marcos, said in a statement Sunday, November 20.

She also reiterated that the President is “aware of our differences in some issues, including the Marcos burial.”

On Friday, November 18, Taguiwalo said that she kept quiet about her opposition to the burial because she did not want to “keep rubbing it in” to her boss.

The Secretary also addressed comments from some quarters that she resign from her Cabinet post as protest.

“I accepted the post in the Duterte government because the Left finds common grounds on pursuing talks for just and lasting peace, prioritizing social services and the needs of the poor including ending labor contractualization and in forging an independent foreign policy,” she said.

“These are equally important issues which we want [President Duterte] to continue to address in a positive manner,” she said, adding that these are ‘major compelling reasons’ to remain in the Cabinet.

On Friday, she held a press conference in Baguio City – where the DSWD is holding its National Management Development Conference – expressing her dismay over the decision.

“In the evening I joined other survivors of martial law and students of the University of the Philippines (UP) as they also denounced the development,” she added.

The Marcos burial issue was one of the major campaign promises of Duterte, a move which was opposed by anti-Marcos groups, who elevated the issue to the Supreme Court. The court, however, ruled in favor of the Marcoses and the government last November 8, which led to the burial – held under a cloak of secrecy – Friday.

Protests across the country denouncing the burial erupted once the news came out, with a major anti-Marcos rally planned for November 25. – Rappler.com