Feb 14, 2012 5:41 PM PHT
Facebook Twitter Copy URL
Copied
Due to concerns about its structural integrity, Manila Cathedral is closed until 2013. 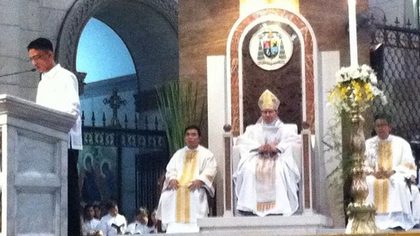 MANILA, Philippines – The historic Manila Cathedral, which Catholic Church authorities have closed for structural repairs until 2013, joins other religious structures that urgently need fortification against earthquakes, based on recent warnings from state seismologists.

The closure will affect about 200 couples who have made reservations up to March 2013 at one of the country’s favorite venues for wedding rites.

Following the magnitude-6.9 earthquake that totally damaged at least 2 churches in the Visayas, the Philippine Institute of Volcanology and Seismology (Phivolcs) also warned other historical churches to prepare for earthquakes.

Phivolcs associate scientist Leonila Bautista said the National Commission for Culture and the Arts, for one, should do the needed renovations as soon as possible, according to an article on the Catholic Bishops’ Conference of the Philippines website.

“It’s a race against time,” Bautista said. “I hope they will do it fast.”

In a circular earlier in February, Tagle enumerated 3 items of “greatest concern” regarding the cathedral’s structural integrity – factors that other Philippine churches and similar structures can take their cue from.

The Manila Archdiocese has designated a temporary “official church” in the meantime.

Earthquakes have destroyed the Manila Cathedral, which has also been reconstructed several times, throughout its 4-century history. –Rappler.com