Nov 25, 2016 8:13 AM PHT
Rappler.com
Facebook Twitter Copy URL
Copied
Here are a few questions that we think the hearing could have done without 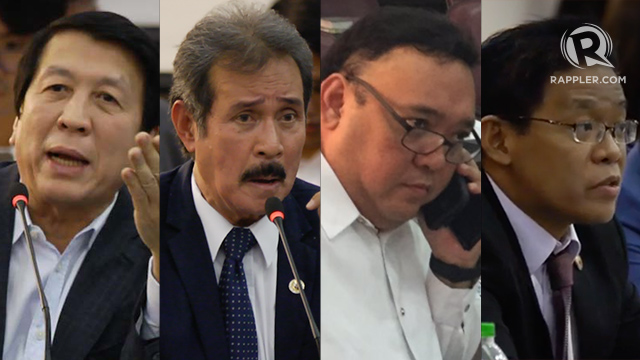 MANILA, Philippines – It was crossing the line, according to many netizens. For Senator Leila de Lima, the hearing was a spectacle.

On Thursday, November 24, the House committee on justice reopened its probe into the narcotics trade inside the New Bilibid Prison (NBP) during De Lima’s stint as justice secretary. The star of the show was her former security aide-driver and ex-lover, Ronnie Dayan, who is being accused by lawmakers, Bilibid convicts, and the justice department of serving as the senator’s bagman in her alleged dealings with drug lords.

At the start of the hearing in September this year, committee chairperson Representative Reynaldo Umali dismissed suggestions that the probe was meant to humiliate De Lima. “This is not about De Lima, but about the proliferation of drug syndicates in the NBP,” he said then.

On Thursday, however, Filipinos were virtually brought to the bedroom once shared by De Lima and Dayan. Prying into the affair, male lawmakers asked how the relationship started, how much they loved each other, what they did, where they went.

Criticized online, some lawmakers maintained they were all valid questions to drive home a point: that Dayan the bagman indeed had a close relationship with De Lima the drug protector.

Below is a list of some of the questions during the hearing that we believe the hearing could have done without, and who asked them.

“May anniversary ba kayo o baka siya lang nag-a-anniversary?” (Did you two celebrate your anniversary in the past, or was she the only one marking the occasion?)

“Kasi sabi mo wagas ang inyong pagmamahalan,’di ba? So dapat naalala mo ‘yun. May anniversary ba kayo?” (You said your love for each other was pure, right? So you should remember your anniversary. Did you guys celebrate an anniversary?)

“Ito bang relasyon ninyo ay nababase sa tinatawag nating pagmamahal?” (Was your relationship based on what we call love?)

“Ang pagsampal mo kay Secretary De Lima nung nalaman mo na siya ay may kaugnayan sa nagngangalan na Warren Cristobal ay isang pagpapakita ng pagselos dahil sa iyong wagas at dalisay na pagmamahal?” (You slapped Secretary De Lima when you found out that she had a new relationship with Warren Cristobal. Was it your way of showing jealousy since your love for her was pure?)

“Kaya totoo at makatarungan at tapat ang iyong pagmamahal sa kanya?” (So your love for her was true and honest?)

“Sinabi niya na kayo ay nagka-relasyon dahil sa kanyang ‘frailties of a woman.’ Naiintindihan mo ba ‘yung ‘frailties of a woman’? ‘Yung pagiging maselan bilang isang babae. Ang tanong ko sa ‘yo: Pinagsamantalahan mo ba itong si Leila de Lima nung nagkaroon kayo ng relasyon? Siya ba ay naging mukhang maselan noong kayo ay nagkaroon ng relasyon? Sa tingin mo ba pinagsamantalahan mo ang kahinaan ni Leila de Lima bilang isang babae noong kayo ay nagkaroon ng relasyon? Nung sinabi mong hindi mo pinagsamantalahan ang kanyang kahinaan bilang babae, ano ang ibig mong sabihin?” (She said you two fell in love because of the “frailties of a woman.” Do you understand the meaning of “frailties of a woman”? It means her weakness as a woman. My question for you is this: Did you take advantage of Leila de Lima during your relationship? Did she seem fragile to you when you started your relationship? Do you think that you took advantage of Leila de Lima’s weakness as a woman during your relationship? When you said that you did not take advantage of her weakness as a woman, what did you mean?)

On the other hand, several lawmakers stayed on point. Leyte 3rd District Representative Vicente Veloso, for example, refused to dwell on the relationship during the hearing. “Ayokong makialam doon. Wala kaming pakialam sa relasyon ‘nyo ni Senator Leila de Lima (I don’t want to interfere there. I don’t care about your relationship with Senator Leila de Lima),” he said.

De Lima admitted their relationship 10 days prior to Dayan’s testimony.

Watch the full video of the hearing here:

What do you think? Could the hearing been effective even without these questions? Let us know in the comments section. – Rappler.com