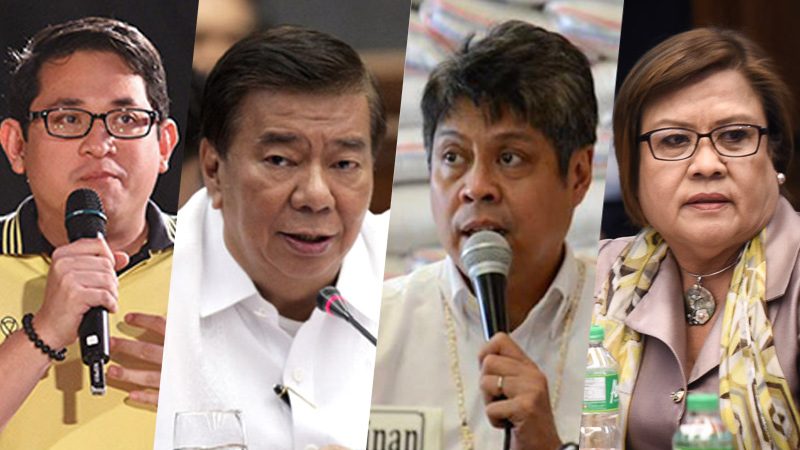 Facebook Twitter Copy URL
Copied
'The disrespectful and condescending line of questioning – which at one point seemed to justify an act of domestic violence – has no place in the halls of Congress,' say Liberal Party senators

“One house of Congress cannot proceed against a member of another house without violating the principles of co-equality and inter-chamber courtesy. The correct procedure is to bring the matter officially before the entire Senate and not directly to one senator,” the LP senators said in a joint statement.

“As aptly noted by our Senate President, ‘If they want to respect it [inter-parliamentary courtesy], well and good. If not, ‘wag sila magtampo (they should not be upset) if it’s the other way around,'” the senators added. (READ: Pimentel to House: Do your job first before telling us what to do with De Lima)

The House justice committee issued a show-cause order against De Lima after her former security aide and lover Ronnie Dayan claimed she had advised him to snub the House probe into the narcotics trade inside the New Bilibid Prison (NBP).

Committee chairperson and Oriental Mindoro 2nd District Representative Reynaldo Umali earlier said they cannot compel De Lima to attend the inquiry out of respect for the longstanding tradition of inter-parliamentary courtesy between the House of Representatives and the Senate.

But Umali said on Thursday that De Lima broke the courtesy when she advised Dayan against attending the congressional probe.

The LP senators condemned the actions of several lawmakers during the hearing, which ended up focusing more on De Lima’s relationship with Dayan instead of the illegal drug trade at the NBP. (READ: Lawmakers feast on De Lima-Dayan love affair)

“As pointed out by people who saw the hearing, the conduct of some members of the House committee on justice was unparliamentary,” the senators said.

“The disrespectful and condescending line of questioning – which at one point seemed to justify an act of domestic violence – has no place in the halls of Congress,” they added.

De Lima also cried foul over the “spectacle” of lies and expressed disappointment and hurt over Dayan’s testimony.

“As a woman, it breaks my heart that my private life and personal relationship have become subject of the public and Congress’ ridicule,” she said.

“No woman, whoever or whatever she may be, whether a sitting senator or a humble secretary, deserves to be betrayed, to be treated with so much disrespect and without dignity, before the public eye, by any man she is with or had a relationship with.” (READ: Netizens on Dayan, De Lima questions: ‘Papa Jack’, ‘crossing the line’)

De Lima has repeatedly denied all allegations, reiterating the evidence against her are mere “fabrications” and part of Duterte’s personal vendetta against her since she initiated probes into extrajudicial killings during his term as Davao City mayor and now, under the administration. – Rappler.com