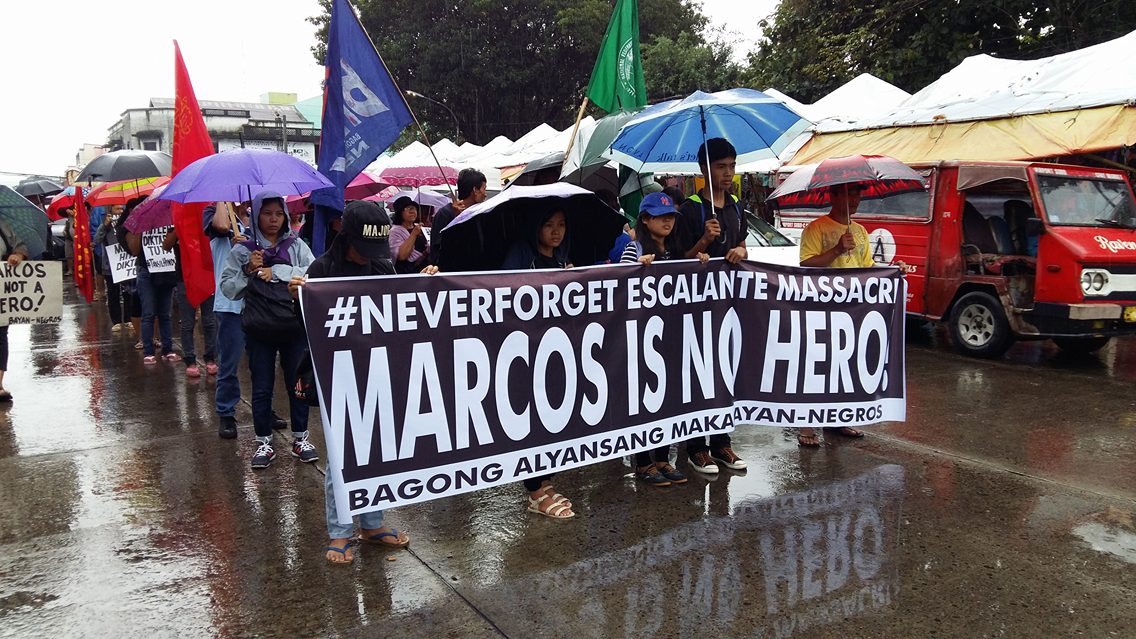 They marched from the San Sebastian Cathedral to the Fountain of Justice to express their indignation over the hero’s burial given to former President Ferdinand Marcos.

The banners they carried specifically called on the public to “never forget” the Escalante Massacre. In 1985, paramilitary forces gunned down civilians holding a rally in Escalante town, Negros Occidental, who were commemorating the 13th anniversary of the declaration of Martial Law.

In August, members of Negros Occidental-based civil society organizations urged President Rodrigo Duterte to rescind his order for a hero’s burial for Marcos, saying this would not promote national healing but would only create deeper fissures among Filipinos.

“In Negros alone, thousands suffered from unjust incarceration and merciless tortures by Marcos soldiers and paramilitary. Priests, nuns, farm workers, church workers, and anyone who stood for human rights were labeled as ‘communists’ and abducted, tortured, and/or killed in the most brutal manner,” they said then.

The Philippine Sugar Commission and its trading subsidiary, the National Sugar Trading Corporation (Nasutra), run by Marcos cronies, pushed sugar planters deep into debt. By 1984, over 190,000 workers lost their jobs and about 1 million people experienced famine in Negros Occidental, the group said, citing a report from the Los Angeles Times.

On Friday, Christian Tuayon, secretary-general of Bagong Alyansang Makabayan-Negros, said that even if they weren’t able to muster a massive crowd due to the heavy downpour, what’s more important is that they were able to join the nationwide protest to denounce and condemn the hero’s burial.

“We are calling President Rodrigo Duterte to cut his ties with the Marcoses and stop their political rehabilitation,” he said.

He added: “We don’t want the Marcoses back in power” because, until now, they have not expressed regret on what the late dictator had done to the country during the Martial Law regime.

Tuayon said that burying Marcos at the Libingan ng mga Bayani only connotes that he was recognized as hero, and “he is not a hero.”

“We don’t want the history to change. We want the new generation to know the real history, that Marcos was never a hero but a dictator,” he stressed.

He said the surreptitious burial of Marcos had caused strain in their relationship with Duterte, although they had been supportive of the pro-people initiatives and the peace talks pushed by the President.

“We won’t keep quiet,” he said, adding that Duterte should be held accountable for allowing the hero’s burial.