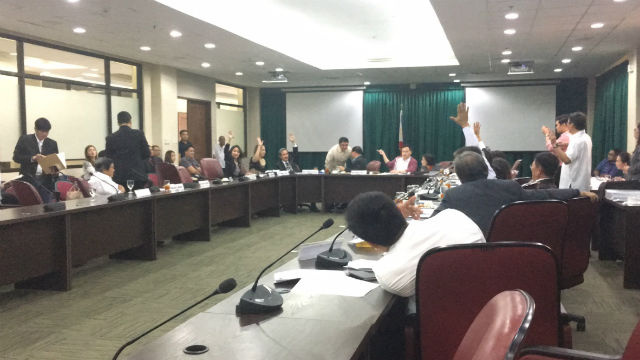 MANILA, Philippines – The justice panel’s subcommittee on judicial reforms of the House of Representatives approved on Tuesday, November 29, a bill seeking to reimpose capital punishment for all heinous crimes.

Subcommittee chairperson Vicente Veloso moved that the members vote between House Bill Number 1, which calls for the reinstatement of the death penalty for all heinous crimes, and a substitute bill that limits the reimposition only on violations against the Comprehensive Dangerous Drugs Act of 2002.

A total of 6 lawmakers favored HB Number 1, while 5 opted for the substitute bill. Two congressmen refused to participate in the vote because they do not support the reimposition of the death penalty.

Prior to the vote on Tuesday, the judicial reforms subpanel had conducted public consultations with various sectors to get their stand on bringing back capital punishment in the country.

HB 1 is set to be brought before the rest of the members of the justice committee, who will then decide if the bill will be sponsored at the plenary floor or not.

Speaker Pantaleon Alvarez, one of the co-authors of HB 1, is hoping that the House of Representatives will pass the death penalty bill on 3rd and final reading by December. (READ: Death penalty method? ‘Whatever is cheaper’ – Alvarez)

The measure is one of the priority bills of President Rodrigo Duterte, who counts more than 250 congressmen as his allies.

During the term of President Gloria Macapagal-Arroyo, now Pampanga congresswoman, the Philippines signed the Second Optional Protocol to the International Covenant on Civil and Political Rights, aiming at the abolition of the death penalty. Capital punishment was eventually abolished under her watch in 2006.

Human rights groups and some lawmakers have objected to the reimposition of capital punishment in the country, saying it is not a deterrent to crime. (READ: Lawmakers urged to reject revival of death penalty)

‘Have a deadly Christmas?’

For Albay 1st Distirct Representative Edcel Lagman, the approval of the death penalty bill at the subcommittee level is the beginning of the House leadership’s alleged “railroading” of the passage of the measure into law.

“The railroading has started and they hope to reach the terminal before the Christmas break,” Lagman said in a press conference.

“In short, the mesage of the House leadership is this: ‘Have a deadly Christmas,'” he added.

Lagman said the presence of ex-officio members, like deputy speakers Castro, Garcia, and Garin during a meeting of a House subcommittee should be considered suspicious.

He also blasted the subcommittee for terminating its invitation for other resource persons to attend the hearing on Tuesday, saying that the past public consultations still left several questions on the death penalty unanswered.

Lagman also asked Veloso during the meeting why the subpanel was able to draft a substitute bill when a committee report has not been issued.

Veloso said that the committee report will only come after HB 1 has been brought before the other members of the justice committee.

“We are supposed to deliberate on the bills at hand. That report will be the cart that would follow the horse. The horse [is this] – let us now deliberate on the pending bills, choose which to adopt, and we will be voting on it. And then we submit our report thereafter to the mother committee,” said Veloso. – Rappler.com