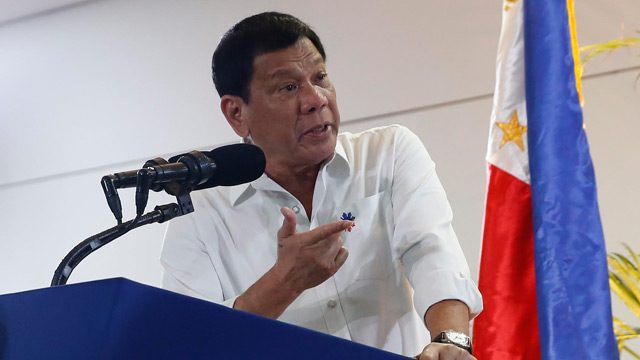 Dela Rosa revealed in an interview on radio dzMM that he has instructed all PNP units to “arrest [Jack Lam] immediately, as ordered by the President, for the case of bribery and economic sabotage.”

According to Dela Rosa, the President is “very angry” at Lam – chairman of the Jimei Group – and wants the Chinese national arrested immediately.

The order comes just days after Justice Secretary Vitaliano Aguirre II said he will not pursue any legal action against Lam, who allegedly attempted to bribe him in connection with the arrest of over 1,300 Chinese nationals illegally working for Lam’s online gaming operations at Fontana Leisure Parks and Casino in Pampanga. (READ: Philippines detains hundreds of Chinese in casino raid)

Aguirre had said on Thursday that there was no “overt act of bribery” on the part of Lam  to substantiate bribery charges against him. They met at the Bonifacio Global City in Taguig City on November 26, two days after the arrest of the Chinese nationals.

Dela Rosa called on the public to provide the police with any information on Lam’s whereabouts.

Asked if a case against Lam had been filed before a court, Dela Rosa said he has no updates yet from the Department of Justice (DOJ).

(They are the ones working on this case. I don’t know yet, but I am just acting on orders of the President, so I presume the DOJ is already working on the case against him. So there, we will arrest him once we see him.)

Can the police arrest him based simply on the President’s order? Dela Rosa said “hanapan natin ng paraan (we’ll find a way).”

While a hold departure order has yet to be issued against Lam, Dela Rosa said the gaming tycoon should not be allowed to leave the country.

(So far, I have not received instructions if Sombero is included, but okay, let’s include him anyway. When we see him, let’s just arrest him as well.)

Lam, through his Filipino lawyer, Raymond Fortun, denied the allegations on Friday.

In a official statement read by Fortun, Lam said he is “a legitimate businessman with proper legal authority to operate the Fontana Leisure Park and Casino.”

“Having the necessary permits and license, Mr Lam has no reason to bribe anyone, much less the Justice Secretary in connection with the arrest of several Chinese nationals in Fontana on 24th of November 2016,” Fortun said.

The lawyer said that while Lam met with Aguirre at BGC on November 26, the businessman “merely wished to inform the good Secretary that he was engaged solely in legal activities in Fontana.” The meeting, facilitated by Sombero and with the assistance of two interpreters, lasted only for 5 to 10 minutes, he added.

“At no time did he, as he now categorically denies, offer any amount of for the release of the Chinese nationals….Whatever Mr Wally Sombero told the Justice Secretary was a matter between the two of them. Mr Lam has no reason to bribe anyone as his operations are legitimate,” the lawyer added. – Rappler.com