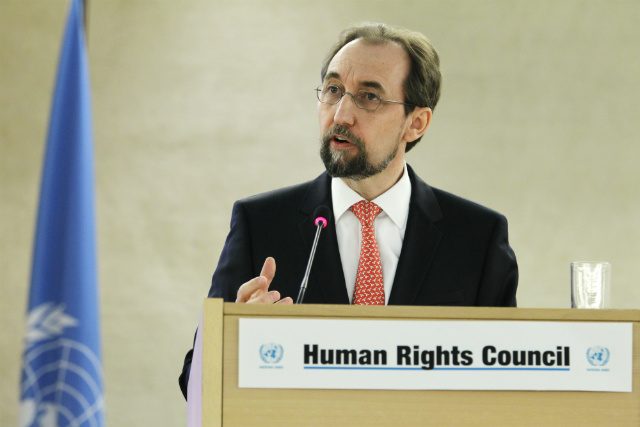 MANILA, Philippines – The United Nations (UN) human rights chief warned that the Philippines will break international law if it revives the death penalty despite having ratified a protocol against the capital punishment in 2007.

In an open letter on Tuesday, December 6, UN High Commissioner for Human Rights Zeid Ra’ad Al Hussein said that the Philippines “would violate its obligations under international human rights law if it reintroduced the death penalty.”

Zeid addressed this letter to Senate President Aquilino Pimentel III and Speaker Pantaleon Alvarez, both allies of President Rodrigo Duterte, who has vowed to revive the death penalty to stop the illegal drug trade in the country.

Zeid told Pimentel and Alvarez, “I appeal to you and all members of Congress to uphold the international human rights obligations of the Philippines and maintain the abolition of the death penalty.”

The UN official explained that the Philippines, in 2007, ratified the Second Optional Protocol to the International Covenant on Civil and Political Rights (ICCPR), which aims to abolish the death penalty.

“International law does not permit a State that has ratified or acceded to the Second Optional Protocol to denounce it or withdraw from it,” Zeid said.

Zeid explained that drafters of both the ICCPR and the Second Optional Protocol “deliberately” excluded “the possibility of denunciation.”

This guarantees “the permanent non-reintroduction of the death penalty by States that ratified the protocol,” he added.

Zeid also quoted from the ICCPR, which the Philippines ratified in 1986.

The ICCPR notes that “in those States which have not abolished the death penalty, the sentence of death can only be applied for the most serious crimes.”

Zeid said the Human Rights Committee, a body of independent experts to monitor the implementation of the ICCPR, “has determined that drug-related offenses did not meet the threshold of ‘most serious crimes.'”

Duterte, when he took office on June 30, vowed that the Philippines “will honor treaties and international obligations” that it has entered into.

This did not deter the President from still pushing for the death penalty as part of his war on drugs that has killed at least 5,869 people since July 1.

Alvarez, a co-author of the bill, hopes to pass HB 1 on 3rd and final reading before Christmas. This prospect has prompted groups, such as the Catholic Church, to step up their moves against the death penalty. – Rappler.com