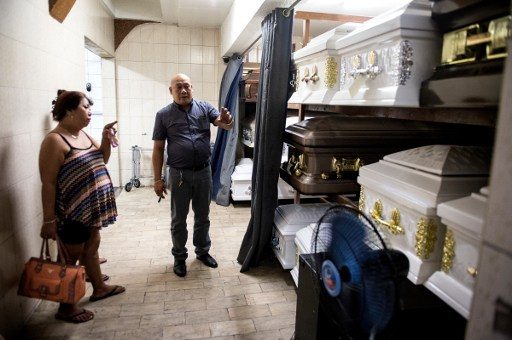 Facebook Twitter Copy URL
Copied
Funeral parlors, while busy, are not necessarily making lots of money, with relatives of many victims often too poor to be able to pay for a funeral

MANILA, Philippines – Business has never been busier for undertaker Alejandro Ormeneta but, after 5 months on the frontlines of the Philippines’ brutal drug war, he just wants the killings to stop.

Ormeneta and his colleagues at one funeral parlor in Manila say they are retrieving an average of 5 corpses a night, mostly from slums, and his grisly new routine has left him questioning the savage forces unleashed by President Rodrigo Duterte’s crackdown on crime.

“This shouldn’t happen, they are people, not animals,” Ormeneta, 47, told Agence France-Presse (AFP) as he recalled taking out 3 nails hammered into the skull of an alleged drug trafficker.

On a typical night recently, Ormeneta walked down a narrow slum alleyway into a shanty where masked assailants had shot a man dead, the victim’s body still smelling of alcohol that he must have been drinking shortly before being killed.

The victim’s sister wailed as police turned over his body on the concrete floor soaked in blood and revealed multiple gunshots to his head and body.

Police later told AFP that Danilo Bolante, 47, had sold shabu, the cheap crystal methamphetamine that Duterte says is ruining society and must be eradicated.

But his sister, Chona Balina, insisted he had stopped and had even reported himself to police as part of Duterte’s campaign to pressure drug traffickers and users into surrendering, known as Tokhang.

“Why launch Tokhang if that’s what they are going to do with people who are already changing,” Balina said.

Duterte won presidential elections this year in a landslide after promising an unprecedented war on drugs in which tens of thousands of people would be killed.

Part of his stump speech on the campaign trail was jocular business advice for people to set up funeral homes in preparation for the killings.

“The funeral parlors will be packed… I’ll supply the dead bodies,” he said, to cheers and laughter at one campaign rally.

Duterte has been true to his word with police reporting killing more than 2,000 people they accused of being drug suspects and another 3,000 people murdered by unknown gunmen, triggering fears of widespread extrajudicial killings. (READ: IN NUMBERS: The Philippines’ ‘war on drugs’)

The deaths look certain to continue with Duterte saying in September he would be “happy to slaughter” 3 million addicts and repeatedly vowing no let-up until the illegal drug trade has been eliminated.

While there are vocal critics of the drug war at home and abroad, surveys show an overwhelming majority of Filipinos support Duterte’s crusade.

Still, funeral parlors, while busy, are not necessarily making lots of money, with relatives of many victims often too poor to be able to pay for a funeral.

“I don’t know how we can afford this because I have no job,” Balina said after agreeing to a funeral package worth 62,000 pesos ($1,250) with Veronica Memorial Chapels for services that include embalming, a casket and the wake.

However Teodocio said he often gave discounts, especially for families of alleged drug users, some of whom paid in coins or raised money from gambling at wakes. He said some also begged cemeteries for free caskets.

“I don’t know if pathetic is the right term to use but you really pity them. We suffer too because we give our lowest price,” he said.

Veronica and other funeral parlors AFP visited also reported that bodies were frequently left unclaimed because relatives of the victims did not know about the death, were afraid of being linked to drugs or were simply too poor.

In these situations, the bodies are kept for two to three months then buried in public cemeteries, at the expense of funeral homes.

“It’s sad. They die without anyone coming for them,” Ormeneta said, pointing to black corpses at the back of the morgue.

Another barrier to funeral parlor success is corruption, with some policemen taking commissions for informing funeral parlors of people who have been killed.

Duterte openly joked about the graft during the campaign.

“These policemen are naughty. It’s true they have a contract. They call the funeral home: ‘There’s a body. Claim it here… I’ll just drop by for the commission tomorrow’,” he said.

Two funeral parlor owners told AFP on condition of anonymity that it was the victims’ families who shouldered the burden of this long-running practice.

“How do you recoup that cost? You have to add it on to the price,” said an executive who has been in the funeral industry for decades.

But while some undertakers treat the profession as just a business, Ormeneta, a father of 4 and Catholic who has been in the industry for 18 years, has been emotionally impacted by the drug war.

He said he often thought about the person with nails in his skull, and had a firm conviction small-time traffickers did not deserve to die.

“They are victims of drugs. They needed to stave off hunger, perhaps for their children. They should have been given a chance to change,” he said.

“Isn’t that written in the Bible? Thou shalt not kill.” – Rappler.com