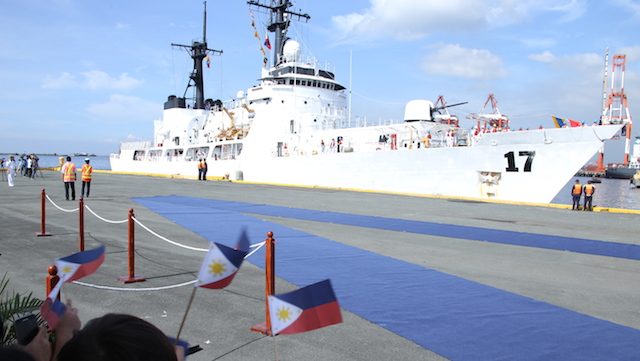 MANILA, Philippines – Defense Secretary Delfin Lorenzana vowed to modernize the Philippine Navy, saying he will continue the efforts of the previous administration.

“We are a maritime country. Our maritime territory is bigger than our land mass. It is just right that we embark on a program to upgrade our Navy. That will be my mission as secretary of defense for the next 6 years,” Lorenzana said on Friday, December 9, during the arrival ceremony for the navy’s latest warship, BRP Andres Bonifacio.

Lorenzana’s statement also ends talk that he plans to leave the post as soon as his replacement is found. It comes after a news report said newly-retired Armed Forces chief General Ricardo Visaya could replace him, a scenario that drew attention after President Rodrigo Duterte joked about it in Camp Aguinaldo. (READ: Duterte to retired AFP chief: ‘Mamili ka na ng puwesto diyan, sir’)

The Duterte administration’s drive to modernize the Navy will have a focus different from the previous Aquino administration, which poured money into the Philippine Navy to deter China’s “bullying” in the West Philippine Sea (South China Sea).

Duterte had expressed fears about the influence of the Islamic State (ISIS) among extremists in the region, particularly about plans to establish a caliphate here.

“Yung mga ISIS diyan ngayon, mga extremists they’re fighting it out in Aleppo and Mosul in Syria and Iraq. Once mawalan ng land base ‘yan, paatras nang paatras sa dagat, magsibatan na ‘yan, and they have this dream of a caliphate, a kingdom that would comprise Indonesia, Philippines, Malaysia and Brunei,” Duterte said on Wednesday, December 7.

(Those who are part of ISIS now, they’re extremists, they’re fighting it out in Aleppo and Mosul in Syria and Iraq. Once they lose their land base, they will retreat to the sea, they’ll leave, and they have this dream of a caliphate, a kingdom that would comprise Indonesia, Philippines, Malaysia and Brunei.)

Lorenzana said he wants to see BRP Andres Bonifacio deployed to fight kidnapping in Sulu, the playground of the homegrown terror group Abu Sayyaf known for crossing the seas to get hostage victims in nearby countries.

“I intend to see this ship plying the Sulu seas to help in kidnapping,” Lorenzana said.

Navy chief Vice Admiral Ronald Joseph Mercardo said BRP Andres Bonifacio will be ready for deployment by the first quarter of 2017. The vessel arrived as a white ship and will need to be painted gray like the other navy ships.

“Your AFP shall be the relentless force ensuring that the Philippine flag is the only flag waving and flying across our land, air and seas,” Año said during the change of command ceremony on Wednesday afternoon, December 7. (READ: New AFP chief: Only PH flag will fly across our land, air, and seas) – Rappler.com