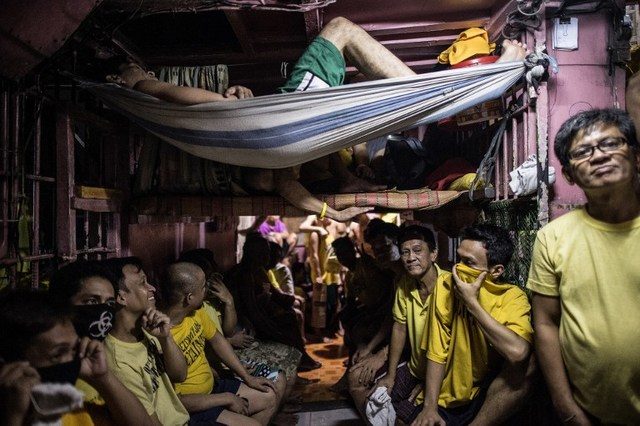 MANILA, Philippines – China has pledged funds for a new detention facility in the Philippines as part of its support for President Rodrigo Duterte’s drug war, the Philippine jail chief said Wednesday, December 14.

Duterte’s unprecedented crackdown has worsened severe congestion in Philippine jails, with Agence France-Presse photographs of Quezon City Jail in July exposing how inmates in one of the nation’s most overcrowded detention facilities took turns to sleep on an open-air basketball court and a staircase.

Duterte has credited China for supporting his crime war, which the United States and the United Nations have criticized over alleged extrajudicial killings. Beijing has provided funding for rehabilitation and offered weapons for the campaign that has left more than 5,000 people dead.

On Wednesday, the head of the Bureau of Jail Management and Penology said that during Duterte’s trip to Beijing in October, China also offered to donate P700 million ($14 million) for detention facilities.

“We feel happy because this will be a big help to address the lack of resources.”

Barretto added that his agency decided to use the money to fund the construction of a new Quezon City Jail, which was built six decades ago for 800 inmates but now houses almost 3,000.

Duterte, 71, took office in June and quickly made good on his campaign promise to launch a brutal drug war that would prevent the Philippines from becoming a narco-state.

The spike in arrests has packed an underfunded and overwhelmed penal system, with the population in Quezon City Jail soaring to 4,100 in August.

The number had since gone down after a local court agreed to temporarily admit new inmates to other jails in Manila with more space, warden Randel Latoza told Agence France-Presse.

City and jail officials said the Agence France-Presse report fast-tracked the transfer of land for a new facility that could house 6,000 inmates by 2019 but finances remained a challenge.

Officials collaborated with the International Committee of the Red Cross to present a new jail design by January.

“We hope to build a first of its kind jail in the Philippines, in Asia, that really factors in the needs of inmates,” Latoza said. – Rappler.com