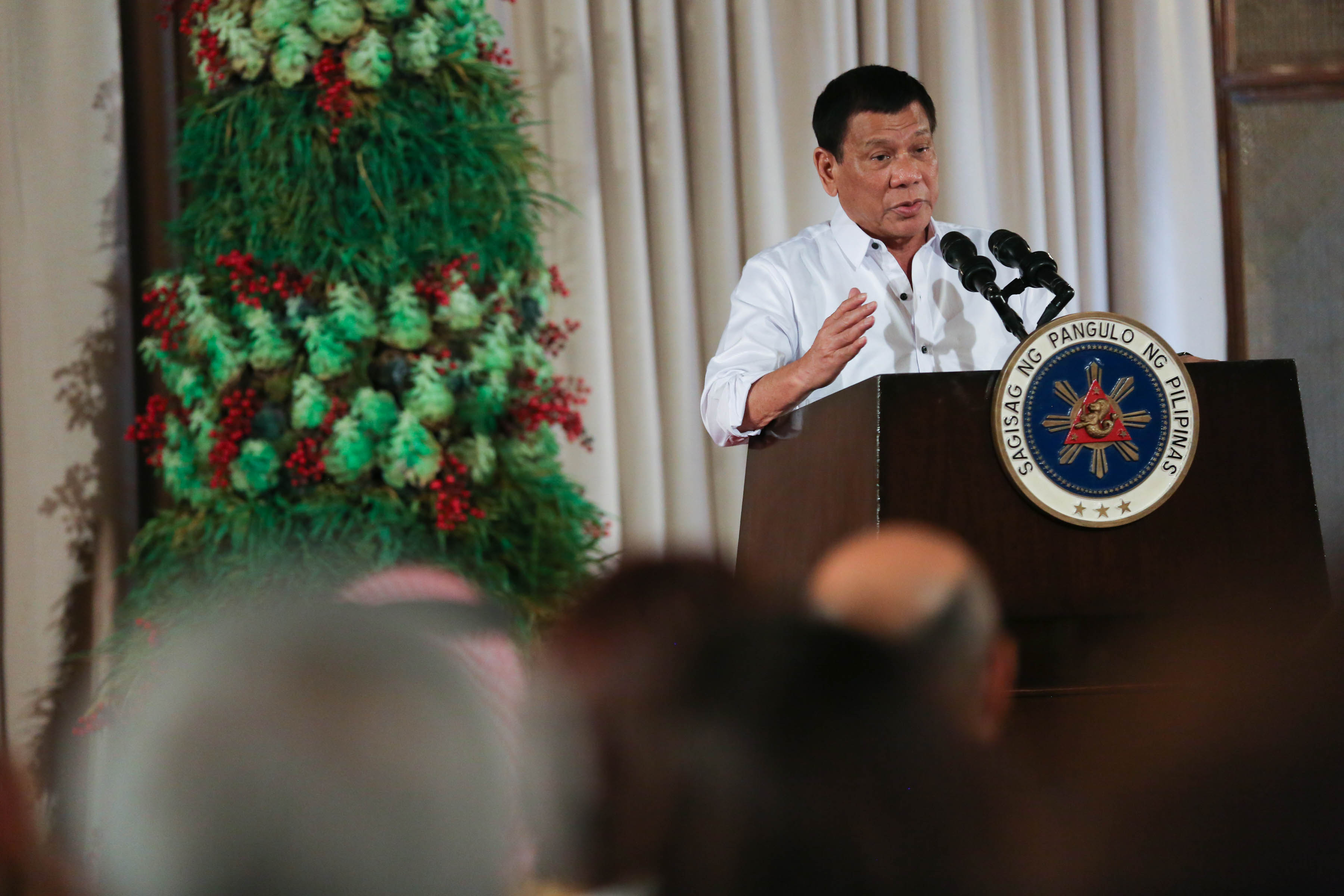 MANILA, Philippines – President Rodrigo Duterte again floated the idea of sharing oil in the West Philippine Sea with China, despite an international arbitral award that says parts of the sea are in the Philippines’ exclusive economic zone. (READ: Philippines wins case vs China)

“I have this arbitral award, so I have to push it. Kung gusto ninyo (If you want), let’s just develop what’s the oil there, hati-hati nalang tayo (let’s divide it up),” said Duterte on Monday, December 19, during a speech at the Palace.

“Anuhin ko naman iyang dagat kung walang (What can I do with that sea if there is no) – What will I do with the Scarborough Shoal? Swim there everyday? For what? To send my soldiers there to die? Nakalutang lahat? (Everyone floating there?)” he added.

While some countries like the United States want Duterte to assert the Philippines’ victory over China in its claims in the sea, he said he would not raise the award any time soon.

Bringing up the award may stoke tensions with China which Duterte now regards as a new “friend” and ally.

“Iyang oil, tayo may arbitral. Gusto nila [US] i-push talaga natin. Bakit naman ako maghanap ng away? (That oil, we have the arbitral award. They want us to push it. Why would I look for a fight?) If I send the Marines there, they’ll be wiped out in just one minute. It will be a disaster,” he said.

His statement comes after increased militarization by the Chinese in the West Philippine Sea, a militarization Foreign Secretary Perfecto Yasay Jr said the government can’t do anything about.

Duterte said he will eventually raise the arbitral award with Chinese leaders but did not say when that time will come.

“There will be a day, sinabi ko kay (I told) Xi Jinping, that we will have to take this up. But not now because I am here as a visitor… But I will bring this up. Alam na niya, pati ang ambassador dito iyong Chinese (He knows, even the Chinese Ambassador). I will bring this up, someday,” said Duterte.

“But it will be during my time, that I have this arbitral award, so I have to push it,” he added.

Duterte says proposals on joint exploration for oil in the West Philippine Sea were not discussed during his state visit to China last October.

Since his 2016 campaign, however, he has said he is open to the idea especially if China agrees to help finance big infrastructure projects like trains.

China has agreed to do just that with Chinese state-owned companies expressing interest in some railway projects approved by the Duterte government.

Under his presidency, the Senate also concurred in the ratification of a treaty allowing the Philippines to formally join the China-led Asian Infrastructure Investment Bank (AIIB).

Full membership in the AIIB “could provide an annual infrastructure financing window to the Philippines of about $200 million to $500 million,” according to Senate finance committee chairperson Senator Loren Legarda. – Rappler.com