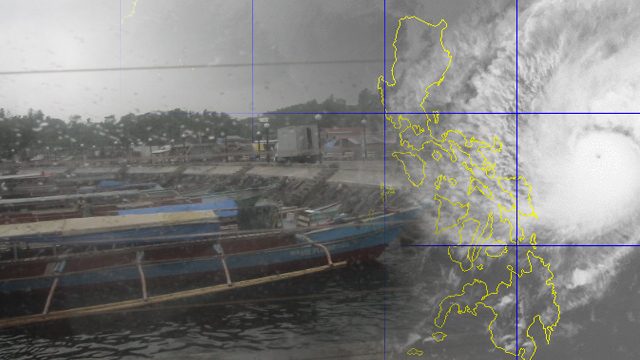 Facebook Twitter Copy URL
Copied
The 3,641 passengers and 407 rolling cargos are bound for the Visayas and Mindanao, as well as the provinces of Catanduanes and Masbate

ALBAY, Philippines – Close to 4,000 passengers and 407 rolling cargos were stranded in various ports in the Bicol region after trips were cancelled on Saturday, December 24, due to Typhoon Nina (international name: Nock-Ten).

Bernardo Rafaelito Alejandro, chairman of Bicol’s Office of Civil Defense and the Regional Disaster Risk Reduction and Management Council, the 3,641 passengers and the cargos were bound for the Visayas and Mindanao, as well as the provinces of Catanduanes and Masbate.

The 6 provinces of Bicol were placed under signal number 1 by the state bureau PAGASA late Friday night.

As of 8:45 am Saturday, at least 2,885 passengers and 366 rolling cargos were stranded at the Matnog port in Sorsogon, bound for the Visayas and Mindanao. Matnog has the highest number of stranded passengers, which is expected to increase later in the day.

Alejandro said that the local government unit of Matnog organized a crisis management committee to ensure the safety of the stranded passengers and manage the increasing number of stranded rolling cargos in the area to avoid traffic congestion.

The Philippine Ports Authority in Bicol ordered the cancellation of sea trips in the provinces of Albay, Sorsogon, Camarines Sur, and Catanduanes.

Cebu Pacific Air also cancelled flights to and from Virac in Catanduanes; Legazpi City in Albay; and Cebu and Naga cities in Cebu province.

Philippine Coast Guard to the rescue

On Saturday, the Philippine Coast Guard (PCG) deployed rubber boats and personnel from its Special Operations Group (SOG) to assist its local unit in the Bicol Region, especially in Camarines Sur.

Meanwhile, 12 M35 trucks are on standby at the headquarters in Manila to assist residents in the national capital region and in Cavite once Typhoon Nina crosses the area.

As of 11 am on Saturday, PAGASA said Nina was 480 kilometers east of Virac, Catanduanes. It again slowed down, now moving west northwest at 15 kilometers per hour (km/h) from the previous 17 km/h.

Nina is expected to make landfall in the Catanduanes-Camarines area on Sunday, December 25 – Christmas Day – likely in the evening. – Rappler.com