Dec 30, 2016 12:26 AM PHT
Pia Ranada
Facebook Twitter Copy URL
Copied
In an interview with Rappler, President Rodrigo Duterte says some of his relatives may have even pledged loyalty to terrorist group ISIS 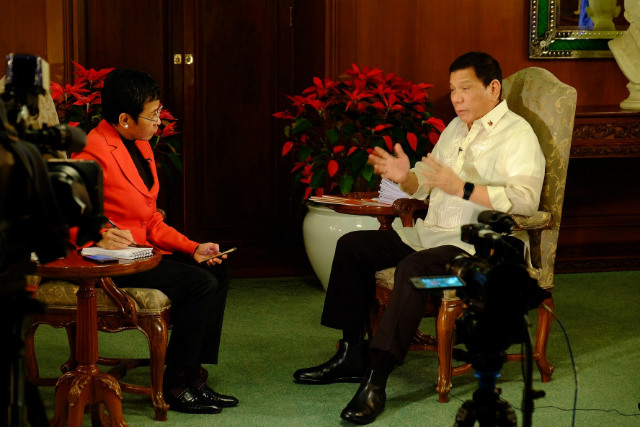 “The ISIS seems to be everywhere. Samal, there was an explosion. In Midsayap, while the priest was giving a sermon on extrajudicial killings, pinaputok ‘yung simbahan niya (his church was bombed),” Duterte said during a one-on-one interview with Rappler Executive Editor Maria Ressa.

Ressa asked, “When you say the Midsayap bomb, that explosion is connected to ISIS?”

The President added, however, that he is “not ready” to share his information on the matter. (READ: Duterte confirms Maute terror group’s ISIS links)

Duterte takes the possible ISIS connection seriously. Before his series of media interviews on Thursday, he presided over a meeting with military and police officials on the recent bombing in Hilongos, Leyte, and the Midsayap bombing which left dozens injured.

So far, no group has claimed responsibility for the blasts, though Duterte said the Leyte explosion may have been related to drugs.

“I hope it will not get out of control. I had conference with top guys of the government, military. I saw them with the police. You have to not only appear strong, you have to be strong because this is another problem, it’s no joke,” he said.

The first Philippine president to admit ISIS presence in the country, Duterte said he has discussed the ISIS threat with other world leaders.

“Yes, part of our discussions,” he said.

He said he some of his relatives may have even declared loyalty to the terror group.

(To be frank, I have cousins on the other side, with MI and MN. Some, I heard, are with ISIS.)

He said sorry in advance should he encounter them in the future.

“Sabi ko, pasensyahan tayo (I said, let’s be understanding to each other). You are you and I am I, and I said, if we meet in one corner, so be it,” Duterte said.

Government troops continue their offensive against local terrorist groups that have supposedly pledged allegiance to ISIS, the Maute Group, and the Abu Sayyaf.

Duterte has previously said foreigners who are followers of ISIS are already in Mindanao indoctrinating young Moros.

Rappler has reported that ISIS has plans to declare a wilayat or province in Mindanao as part of their caliphate in Southeast Asia. – Rappler.com