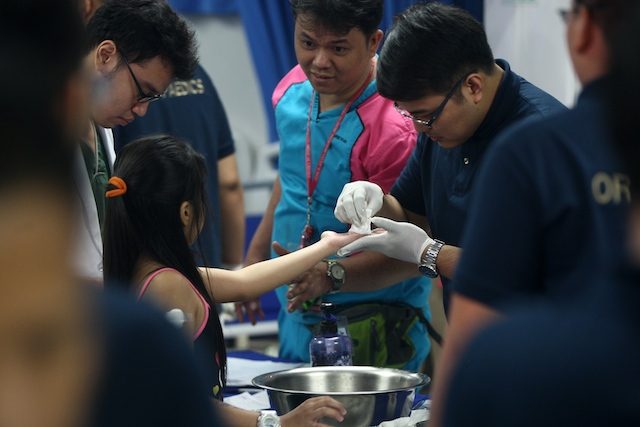 Health Secretary Paulyn Ubial said in a news conference on Sunday, January 1, that the number of injuries was as of 6 am of the first day of the year. (READ: New Year shooting, firecracker injuries mar PH celebrations)

She said that of the 350 cases reported by the Deparment of Health’s 50 sentinel sites all over the country, 348 were caused by firecrackers and fireworks, while the other two involved cases of fireworks ingestion.

The piccolo, an illegal firework, continued to be leading cause of firecracker-related injuries, accounting for 38% of the cases. Kwitis came in next as 20% of the injuries were caused by the legal firework.

Luces and fountain accounted for 5% of the cases, respectively.

The fireworks and firecrackers surveillance of the DOH began on December 21 and will end on January 5.

Ubial said that a majority of the victims or 58% of the cases are below 15 years old. The victims are aged 2 to 71 years old, and the median age is 13, she added.

Most of the cases – 211 or 60% of the total as of January 1 morning – were reported in the National Capital Region.

The patient, confined at the Jose Reyes Medical Center in Manila, is currently in a “deep coma,” aided by a ventilator.  She could not be operated on, since the bullet is lodged deep in her head.

No injuries, deaths in Davao City

“Davao is a proof that celebrations are possible even without firecrackers and pyrotechnic materials that could cause harm to us and to our children,” said Sarah Duterte, the daughter of the President, in a media statement.

She said the Davao City Police Office and the Task Force Davao strictly implemented the ban against the use of firecrackers in the city. Sarah Duterte also thanked her constituents for cooperating with the authorities.

Ubial said injuries during this year’s revelry, which would be collated until January 5, were the lowest in 10 years after Duterte said he was considering repeating a ban on firecrackers which he implemented when mayor of his southern home town of Davao.

“People are now afraid to light firecrackers because of the President. They have this impression that somehow they will get caught or they will be punished,” Ubial said.

Last year, the DOH recorded a total of 932 firecracker-related injuries between December 21, 2015 and January 5, 2016. There was also one death due to massive injuries from an exploding Goodbye Philippines.

The DOH is expected to give updates on the total number of injuries related to the New Year’s Eve revelry until January 5.

The department has proposed to President Rodrigo Duterte an executive order (EO) that would limit the use and possession of firecrackers or pyrotechnic devices in the country, but this has been put on hold until 2017. – with a report from Agence France-Presse/Rappler.com