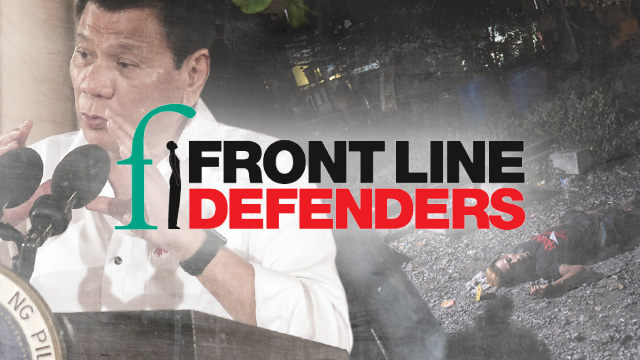 MANILA, Philippines – A recent report by international human rights watchdog Front Line Defenders said President Rodrigo Duterte “normalized the act of extrajudicial killing in his war on drugs” – a campaign which has already seen over 6,200 deaths in the Philippines in the last 6 months.

“In the Philippines – which already ranks as the most dangerous country in Asia for [human rights defenders] – President Rodrigo Duterte normalized the act of extrajudicial killing in his war on drugs, lowering the political cost of murder and thus raising the risk to defenders whose work threatens powerful interests,” the Front Line Defenders said in its Annual Report on Human Rights Defenders at Risk in 2016.

The report released this week said that at least 31 human rights defenders (HRDs) in the Philippines were murdered in 2016. The group also reported 31 deaths in 2015.

“By calling for the extrajudicial killing of those involved in the drug trade, President Duterte has helped create an environment where murder is being promoted as an acceptable method of dealing with certain problems,” the report read.

Duterte, however, often says contradictory things about his policy on drug personalities. In December, he denied allegations that killings being linked to his war on drugs are state-sponsored. (READ: Duterte: We will investigate mysterious killings)

He even warned the police and the military against killing innocent people, but months earlier he reminded soldiers that no matter how many criminals they kill in the line of duty, he will pardon them and even give them a promotion.

The Front Line Defenders in its report also called out Duterte for “threatening to kill HRDs because of their criticism of allegedly drug-related extrajudicial killings.” (READ: Duterte’s threats alarm rights groups)

The group pointed out that the President’s threat “is liable to have a profound impact on the security of HRDs who are already at grave risk.”

According to the group, many attacks in 2016 targeted indigenous or environmental rights HRDs in the Philippines who are opposed to extractive or polluting industries.

“The attack was alleged to have been perpetrated by soldiers assigned to secure a mining project that the WHRD [woman human rights defender] campaigned against on environmental grounds. There was no progress in the investigation into her murder,” the report said.

Globally, a total of 281 HRDs were killed in 25 countries in 2016, and 49% of them were defenders of land, indigenous, and environmental rights.

The report noted that “in the vast majority of cases, killings were preceded by warnings, death threats and intimidation which, when reported to police, were routinely ignored.”

In a statement on Tuesday, January 3, Front Line Defenders Executive Director Andrew Anderson demanded “an urgent and systematic response” from 6 countries, including the Philippines, for the killings of HRDs.

“This report honors the hundreds of defenders killed in 2016. We mourn their loss and celebrate their lives and achievements. Each and every peaceful HRD killed is an outrage. The scale of the killings in Brazil, Colombia, Guatemala, Honduras, Mexico and the Philippines is a bloody indictment of the governments concerned; it demands an urgent and systematic response,” Anderson said.

In 2016, many HRDs worldwide were also harassed, detained, or subjected to smear campaigns and other violations. The report also documented hundreds of physical, legal, and social attacks on activists.

Criminalization, according to the Front Line Defenders, was governments’ “first choice…to silence defenders and to dissuade others.”

In fact, arbitrary detention was reportedly widespread in 2016, ranging from a few hours of detention in Nicaragua to prevent HRDs from attending protests, to years-long house arrests in China.

“This type of stigmatization of human rights defenders, and smear campaigns that place them in physical danger, are tactics employed around the world,” said Andrea Rocca, Head of Protection at Front Line Defenders.

“Such comments feed an insidious narrative which questions the universal nature of human rights, and puts the burden on activists to defend the legitimacy of their peaceful, critical work.”

The Front Line Defenders report also discussed the threats against HRDs in Bangladesh, and in European countries such as Hungary, Poland, Greece, and Turkey, where organizations assisting refugees face harassment due to the “increasing anti-immigrant sentiments and xenophobia.” – Rappler.com