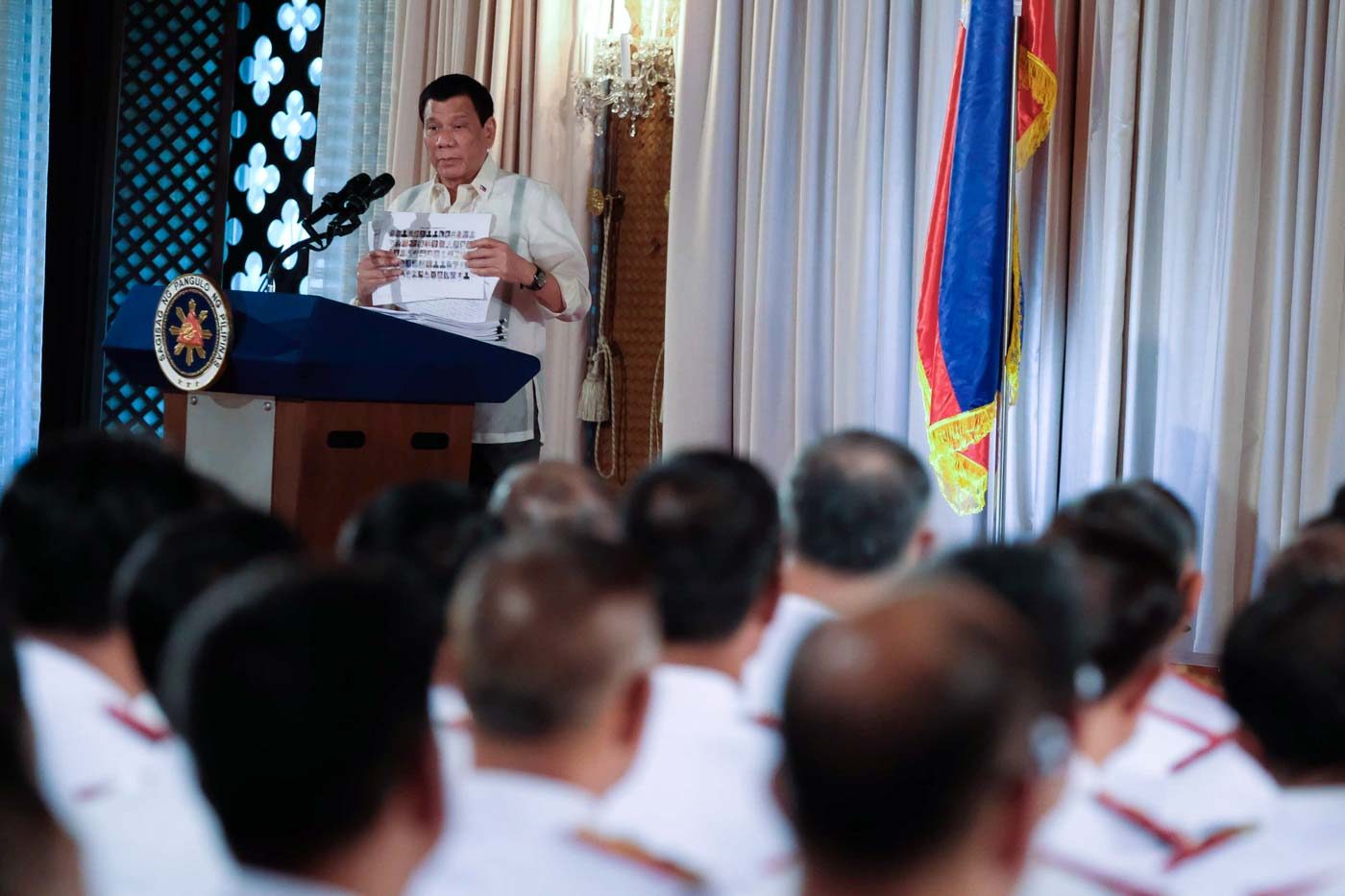 MANILA, Philippines – After the murder of a South Korean that President Rodrigo Duterte admits “embarrassed” him, he has ordered the “cleansing” of the Philippine National Police (PNP).

“This killing a Korean…They could have killed, strangled him everywhere, anywhere but they say it had to happen inside the Camp Crame, is really bad, we admit that. Something has to be corrected severely,” said Duterte on Sunday, January 29, during a late-night press conference at the Palace.

“Because of this sordid incident, let me reorganize the system. Ang kalaban ko dito mga pulis na kriminal (My enemies here are the police who are criminals),” he added.

During the joint command conference with police and the military on Sunday, Duterte ordered the dissolution of all anti-drug units in the police force.

“As directed by the President, we agree to dissolve all anti-drug units at all levels including [the] Anti-Illegal Drugs Group,” said PNP chief Director General Ronald dela Rosa in the same press conference.

Duterte also instructed Dela Rosa to create a list of cops with criminal records and those who were reinstated after facing cases. These tainted personnel will be sent to the front lines of the government’s offensive against terrorists in Mindanao.

“This cleansing is easy. All we have to do is look at the records of how many policemen have had cases, mostly involving extortion, and if they are reinstated – it’s over with, it was done legally – I’ll just gather them, bring them new uniforms, new combat boots. I have to have a strong presence in Basilan and Lanao, they’ll be the first I send there,” he said.

Duterte intends to create a “narcotics command” to weed out police involved in the drug trade. The new command will be under the Philippine Drug Enforcement Agency (PDEA).

“I said I will establish a new command… The overall head of that is the PDEA,” said the President.

Given the overhaul of the PNP’s implementation of the drug war, Duterte has decided to extend yet again his deadline for “suppressing” the country’s drug problem.

“The drug war I will extend to the last day of my term. Wala na ‘yung March [deadline] (No more March deadline),” he said.

March had been the latest deadline of his drug war after he had first extended it in September 2016.

He admitted he had been over-confident in setting a 6-month deadline when he was a presidential candidate.

(There is no more March deadline because I didn’t expect this. I was a mayor then when I was making boasts, I said, ‘Stop drugs’ – my paradigm was limited to Davao City.)

He may have promised an overhaul of the PNP, but Duterte chose to reject Dela Rosa’s resignation, dismissing the argument that Dela Rosa should be held accountable for the murder based on the “chain of command” principle.

Duterte said businessman Jee Ick Joo’s murder, which he alleges was masterminded by Superintendent Rafael Dumlao, gives him a reason to “do more” in purging the police of abusive personnel.

“The more reason for us to do more and the correct way to do it, if I may say so is go against those who perpetrated the crime. Sila ‘yun (That’s the police),” he said.

In previous public speeches, Duterte assured police he would pardon them if they were ever accused of a crime while in the performance of duty. He had even said he would “promote” them if they massacred criminals.

In his Sunday press conference, Duterte admitted he thought 40% of police are “used to corruption.”

“You are corrupt to the core,” he also said.

More than 7,000 people have died in drug war-related incidents as of January 28. Of this, over 2,500 were drug suspects killed in legitimate police operations, while more than 3,600 are under investigation. – Rappler.com