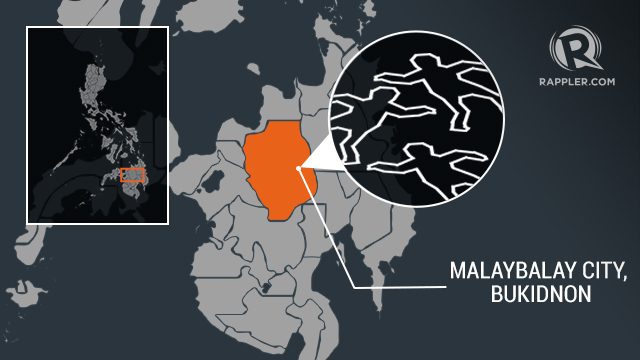 CAGAYAN DE ORO CITY, Philippines (UPDATED) – Three soldiers were killed by a group of armed men belonging to the New People’s Army (NPA) in Malaybalay City, Bukidnon on Wednesday, February 1, a statement from the group released to the media on Thursday said.

The shooting happened just as the Communist Party of the Philippines (CPP) – through its armed wing the NPA – terminated its unilateral interim ceasefire on Wednesday. The CPP accused the Duterte administration of failing to release more than 400 political prisoners.

On Friday, February 3, scene of crime operatives (SOCO) said the soldiers sustained 76 gunshot wounds between them – or each soldier getting at least 24.

Allan Juanito, NPA spokesperson for the Northcentral Mindanao Region, said 3 soldiers from the Philippine Army’s 8th Infantry Battalion’s Community Organizing for Peace and Development were on board two motorcycles when they were flagged down by the NPA in Sitio Kalib, Barangay Kibalabag in Malaybalay, at around 5:00 pm on Wednesday.

The troopers tried to fight back, pulling out their firearms, but the NPA shot at them first.

“The NPA fighters were forced to fire first to defend themselves resulting in their (the soldiers’) deaths. Taken from them were 3 .45 caliber pistols,” the NPA said.

Recovered from one of the dead soldiers was an identification card identifying him as a certain Pat Olango from Barangay Cugman.

In a separate interview, Captain Joe Patrick Martinez, spokesperson of the Philippine Army’s 4th Infantry Division, said the soldiers were unarmed and wearing civilian clothes when they were “murdered.”

“They were not just gunned, they were murdered,” said Martinez.

Captain Norman Tagros, 403rd Infantry Brigade civic military operations officer, said the soldiers were on their way from Malaybalay to Barangay Manalog “to secure some documentary requirements for a livelihood project that they were facilitating in the community.”

“This (act) perpetrated by the NPA only shows that they are not fighting for an ideology anymore. They have resorted to criminal acts and banditry the moment they murdered our troops and took their money and personal belongings,” Tagros said.