Feb 8, 2017 10:56 AM PHT
Camille Elemia
Facebook Twitter Copy URL
Copied
The House contingent of the Commission on Appointments asks Foreign Secretary Perfecto Yasay Jr about his citizenship but the Cabinet official has yet to respond 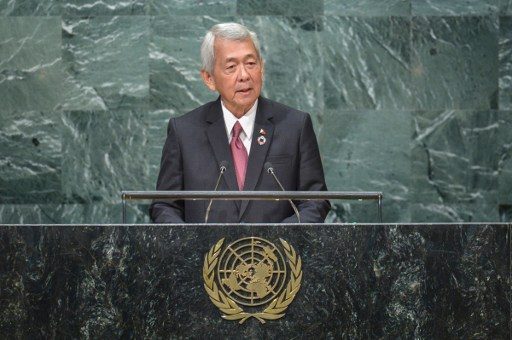 MANILA, Philippines – The Commission on Appointments delayed the confirmation of Foreign Secretary Perfecto Yasay Jr over his unanswered citizenship issue.

The CA issued a notice of hearing on Yasay’s confirmation for Wednesday, February 8, at 9 am, but the Cabinet official was a no-show. Only the 5 ambassadors scheduled for the day appeared before the CA.

San Juan Representative Ronaldo Zamora, CA vice chairman, said the 12-man contingent of the House of Representatives requested to delay the confirmation. The House group has a practice of questioning an appointee first before the latter faces the CA committee, and then the plenary.

Asked for the basis of their request, Zamora cited the Rappler article that showed Yasay, despite his denial, owned US passports. (READ: US citizenship issue hounds Yasay ahead of CA confirmation)

“Several reasons. Well you’re one of them,” Zamora told the media which included a Rappler reporter. “You came up with a story that we want him to respond to.”

He added, referring to the Rappler story: “‘Di ba (Isn’t it that) in your story that all of us read, nakalagay doon na (it’s stated there that) he carried an American passport. You even gave the numbers. You also said his wife and his children are all American citizens. We want him to tell us, ‘Ito totoo but hindi na ‘ko (This is true but I’m no longer an) American citizen, although I was an American citizen at one time.'”

Zamora said Yasay has yet to respond to their questions. They originally scheduled the House contingent’s meeting with the secretary on Monday, February 13, but Yasay has a previously set engagement. It has been moved to the week after, Monday, February 20.

“We have already said there is [a question], would you like to respond? Hindi pa sumasagot. Ayaw naman namin unahan  (He hasn’t responded yet. We don’t want to preempt him) because we have not had a meeting. I scheduled a meeting next Monday with him but he’s going to be hosting the ASEAN something. He asked us for Monday after next, that will be 20th,” Zamora said.

Rappler has repeatedly asked Yasay for his side but to no avail.

While Yasay said he was never an American and never owned a US passport, at least 4 independent sources told Rappler otherwise.

Yasay renounced his US citizenship, according to at least two sources privy to the information, and used his US passport for the last time for travels to the Philippines in 2009. But he denied he was ever a US citizen when asked directly.

Ted Laguatan, a US-based immigration lawyer, explained that “only US citizens can have US passports.” Recognized as an expert-specialist in immigration law by the California State Bar, Laguatan also said, “If a person holds a valid US passport, he is undoubtedly a US citizen.” – Rappler.com