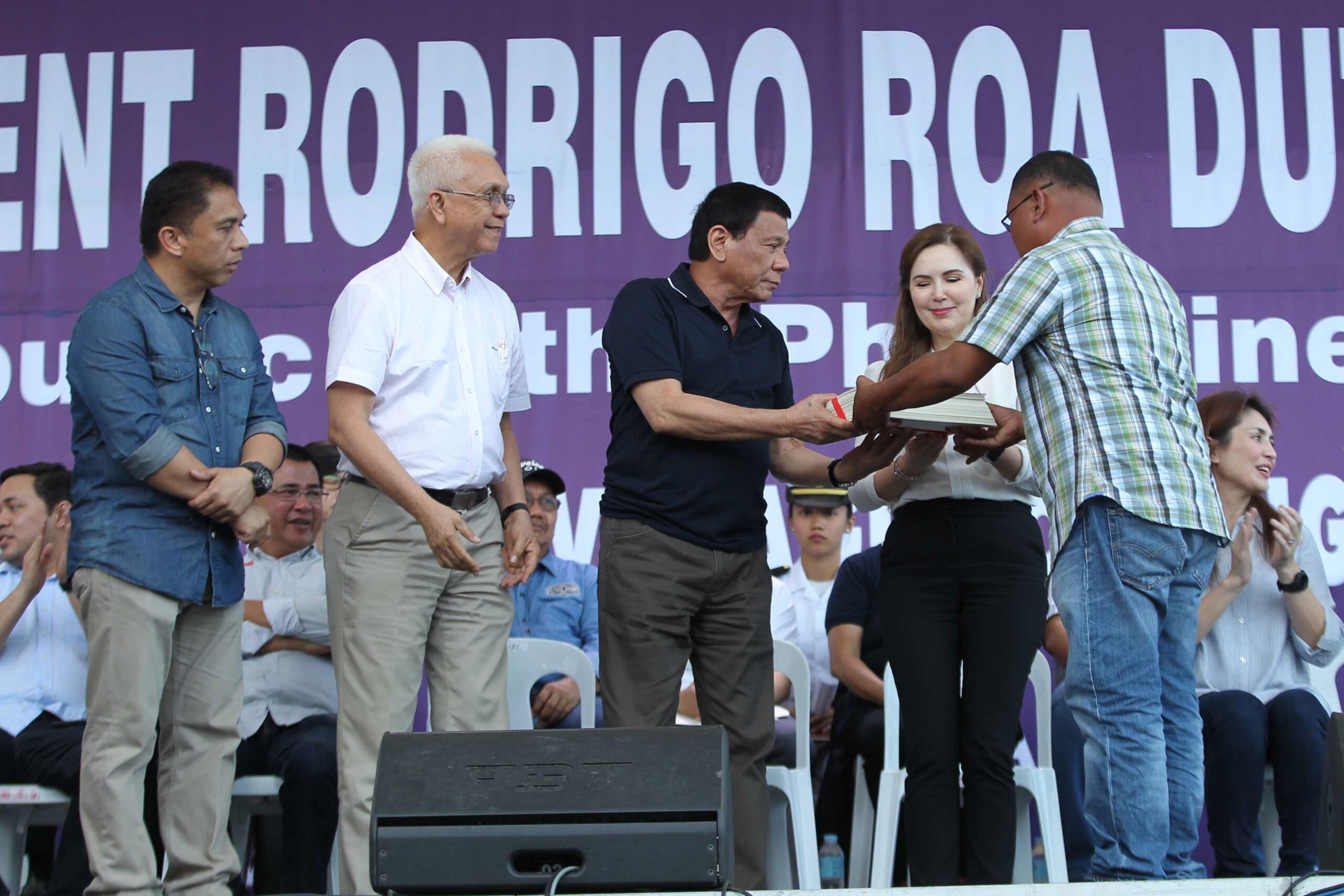 MANILA, Philippines – President Rodrigo Duterte announced that all government housing for Super Typhoon Yolanda (Haiyan) and Typhoon Pablo (Bopha) victims will be provided to them free of charge.

Duterte’s announcement was greeted by loud cheers and clapping from his audience, beneficiaries of government housing projects.

He made the announcement after his main speech – in fact, after he had stepped off the podium to give way to photo opportunities with members of the audience.

After the President’s short announcement, he left without elaborating. But National Housing Authority General Manager Marcelino Escalada Jr confirmed to reporters the approval of free housing for Yolanda victims.

“We already approved that in the recent board of the NHA. We recommended to the President that all Yolanda projects will be full grant so that would mean all beneficiaries in Yolanda of Samar, Leyte, Tacloban, Palawan, Cebu, Iloilo, Panay, Antique are all free,” he told reporters.

The decision was approved by the board and concurred in by Duterte last January 27.

In total, 205,000 beneficiaries will each get a house and lot for free. A house and lot package costs around P290,000 each. All in all, the house grants are worth around P50 billion, Escalada said.

Asked where the funds for the free housing will come from, Escalada said it is funded by national government appropriations from 2014 to 2017.

The provision of free grants for house and lot is similar to grants given to Typhoon Pablo victims. Around 98% of government housing for Pablo victims has been completed, he added.

The free housing is expected to take a big burden off the shoulders of Yolanda victims.

“These are victims of calamities and they cannot recover over time even over for the next 5 years, 6 years, or 10 years because they haven’t even secured livelihood and here is one imposition from government, another obligation passed unto them,” said Escalada.

He explained the system for the house and lot grants. The house will be given for free while the land will be given to victims through a usufruct agreement with government.

“The grant for the house is free, the grant for the land will be usufruct so that people wil not be able to sell it, dispose of it, or make it as a collateral for future financial requirements,” said the NHA official.

The beneficiary will only be asked to pay the government back for the land if they sell, mortgage, or turn into collateral the piece of land.

“In the event they sell it so that would mean violation of the usufruct agreement, we will recall any award that will violate the terms and conditions,” said Escalada.

In his speech, Duterte also ordered the fast-tracking of land conversion, a process that is the cause of delay in housing projects.

He required DENR directors to process such applications in 15 days.

“It behooves upon the director of the DENR of that place to work on that and give the conversion on time, huwag ka maghintay (don’t wait) because you are only given 15 days,” he said.

(If someone calls me, says you are making things difficult, I will call you, go to you, either I will kick you in public or slap you.)

Since the start of his presidency, Duterte has visited Tacloban City, one of the cities heavily damaged by Yolanda, to check on the progress of housing sites. – Rappler.com