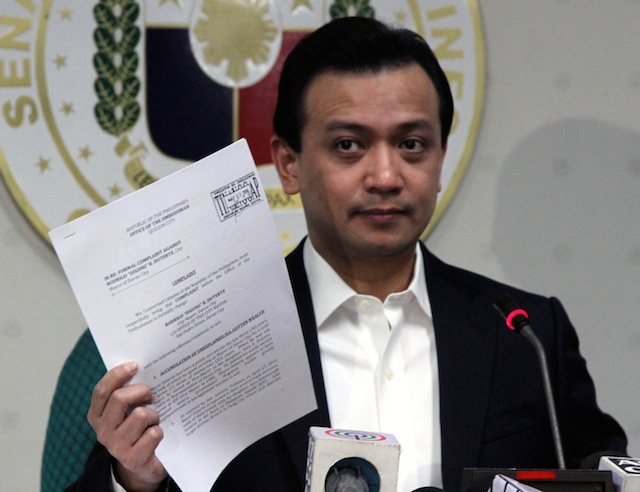 The summary of transactions was among the supposedly “verified” bank documents that Trillanes made public, as he renewed his 9-month-old “challenge” for Duterte to come clean on his bank accounts that reportedly amounted to as much as P2.4 billion when he was still Davao City mayor. (READ: Trillanes on Duterte’s P2.4-B accounts: ‘Prove me wrong’)

Uy’s alleged deposits never went below P7 million per transaction. The Davao City businessman supposedly deposited between P10.3 million and P10.6 million to accounts owned by Sebastian and Avanceña at least 8 times. Based on the documents from Trillanes, these transactions worth P10 million and above were made between October 2011 and April 2013.

From 2011 to 2013, Duterte served as vice mayor of Davao City while his daughter, Sara, was mayor. Paolo was part of the city council then.

Uy is listed as among Duterte’s campaign donors during the 2016 elections. Based on Duterte’s Statement of Contributions and Expenditures (SOCE), Uy donated P30 million to his campaign.

He was also part of a meeting between Duterte and Japanese Prime Minister Shinzo Abe in Tokyo last October. While Uy was reported to be in the presidential delegation during Duterte’s official visit to Japan, he was not expected to be a key player who would merit inclusion in the summit meeting. (READ: Someone named Sammy Uy came to the Duterte-Abe summit) – Rappler.com