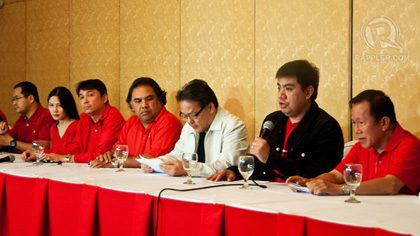 MANILA, Philippines – The defense counsels of Chief Justice Renato Corona said they should not be held in contempt by the impeachment court because they only meant to protect “its members from any form, color or shape of interference at the first instance.”

In a 12-page explanation submitted to the court Friday afternoon, the defense explained why they should not be punished for talking about rumors that Malacañang planned to bribe senator-judges P100-M each to defy the temporary restraining order issued by the Supreme Court against the release of Corona’s foreign currency accounts.

They acknowledged the choice was “controversial” but done in “good faith.” They also said that if they did not reveal the reports they received, a constitutional crisis would have ensued had the plan “been proven true and successful.”

The explanation reiterated an apology from the defense counsels who promised to “exercise more prudence and restraint in the future.”

The statement claims the defense was “tipped-off in the strictest of confidence” on Saturday, February 11, that Executive Secretary Paquito Ochoa was contacting senator-judges to urge them to vote against the TRO.

It said the defense approached other sources about the information and it “appeared to jibe with the report,” leaving them with “no choice” but to publicize the information.

Upon receipt of the information, Corona’s counsels organized a press conference Sunday night, “knowing that any delay in acting might cause paramount personal, judicial and constitutional repercussions.”

The senator-judges were scheduled to vote on the TRO Monday morning, February 13.

The urgency of the situation, and the possibility of the rights of their client being railroaded, not to mention the Constitution being violated, prompted them to proceed with the Press Conference, to shed light on what can only be called an anomalous influence-peddling as reported by sources, the explanation said.

The defense said they did what they did to protect “their client, the body of jurors and the institution itself” and  emphasized that they do not question the integrity of the senator-judges but on the contrary, wanted to make sure they are protected from “the viciousness of those who dare assault their integrity and competency.”

The Chief Justice’s team asked for the same leniency extended to the prosecutors who, they say, have been merely warned for their wrongdoing outside the court.

They argued they should not be punished because they did not make any threats against the impeachment court nor sought to intimidate the senators.

Corona’s counsels mentioned jurisprudence in their argument against the legality of holding them in contempt.

They said Burgos v. Macapagal-Arroyo decided that contempt should not be assumed and should be proven beyond reasonable doubt by the prosecution, in this case the impeachment court.

Holding someone in contempt should be “corrective rather than the retaliatory idea of punishment,” according to Baja v. Judge Macandog, the counsels said.

The defense also pointed to President Aquino’s speech Thursday, February 16, where he attacked Corona, as an “indirect confirmation of the President’s foiled attempt to have his way with the impeachment.”

The defense refused to name their source, citing Canon 17 of the Code of Professional Responsibility which states “a lawyer owes fidelity to the cause of his client and he shall be mindful of the trust and confidence reposed in him.” They argued they cannot be held in contempt for “their zeal and fidelity to their client” and their interest in “protecting his rights and interests, the judicial process…and the sanctity of the Constitution.”

The explanation also cited the privilege of “attorney-client confidentiality” in refusing to reveal their source, saying it can be applied to a person who provides the lawyer “confidential information in connection to communication between a lawyer and a client.”

They mentioned that revealing their sources could make them criminally liable, according to Article 209 of the Revised Penal Code which prohibits the revelation “of any of the secrets of the [client] learned by him in his professional capacity.”

Defense spokesperson Ramon Esguerra told Rappler that the defense does not regret holding the press conference.

He said that as soon as their Saturday meeting was over, which they have every week, the decision to go public with the reports was clear and “unanimous.”

Corona was reportedly in the same meeting.

There was immediate backlash toward the defense as soon as the press briefing ended. The prosecution accused the defense of diversionary tactics and undermining the integrity of the impeachment court, while the senator-judges denied the accusations.

On Monday, February 13, various senators criticized the defense panel during the session and demanded for an explanation. It resulted in an order by the court for the defense to submit a written explanation before the end of the week.