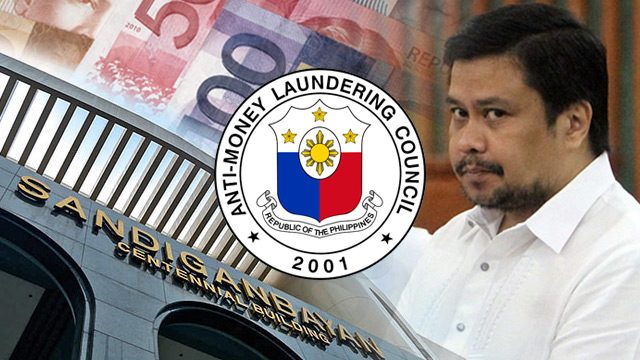 MANILA, Philippines – The Sandiganbayan Fifth Division on Tuesday, February 21, rejected the argument of the Anti-Money Laundering Council (AMLC) that it cannot submit records of Janet Lim Napoles’ bank transactions that it had looked into because these are confidential.

In dismissing the council’s Motion to Quash Subpoena filed last December 15, the anti-graft court sided with pork barrel scam suspect Senator Jinggoy Estrada. The senator’s lawyers want to scrutinize how AMLC arrived at its findings linking him to Napoles.

“Senator Estrada correctly argued that the AMLC’s general claim of confidentiality…lacks basis as the latter did not cite any authority for such claim. More so, the said documents are relevant to the instant case since these would determine the scope and regularity of the investigation conducted by the AMLC,” the Sandiganbayan said. (READ: Jinggoy Estrada’s pre-trial for plunder reset anew)

The Sandiganbayan’s 10-page resolution ordered the AMLC to comply with Estrada’s request, and produce its inquiry report on the banking and other financial transactions of Napoles from 2004 to 2012 relative to the Priority Development Assistance Fund (PDAF). (FAST FACTS: The Anti-Money Laundering Council)

The Sandiganbayan added that except for AMLC documents already attached into the case volumes, the rest of the papers sought by Estrada from the council should be brought to court.

AMLC had claimed that the records sought by Estrada were either confidential and therefore covered by Republic Act 9160 or the Anti-Money Laundering Law. It said these are “internal matters submitted to the Council members for their consideration, deliberation, and resolution.”

The court, however, found that “the instant motion must be denied for utter lack of merit.” It held that the AMLC’s contention of confidentiality “does not inspire belief.”

The council also argued that some of the documents sought by Estrada to be submitted to the court would not be material or relevant since they only consisted of “investigative techniques and methodology.”

The court disagreed with the AMLC: “The argument is unpersuasive. The production of the document…would establish the probable cause connection between Senator Estrada and the financial transactions of Ms. Napoles. Simply put, the documents described…would explain why Senator Estrada is being indicted for the crime of plunder.”

The court added that the accuracy of the reports submitted by the council “hinges on the manner how the investigation was carried out.”