CIDG gives De Lima until 10 am Friday before arrest 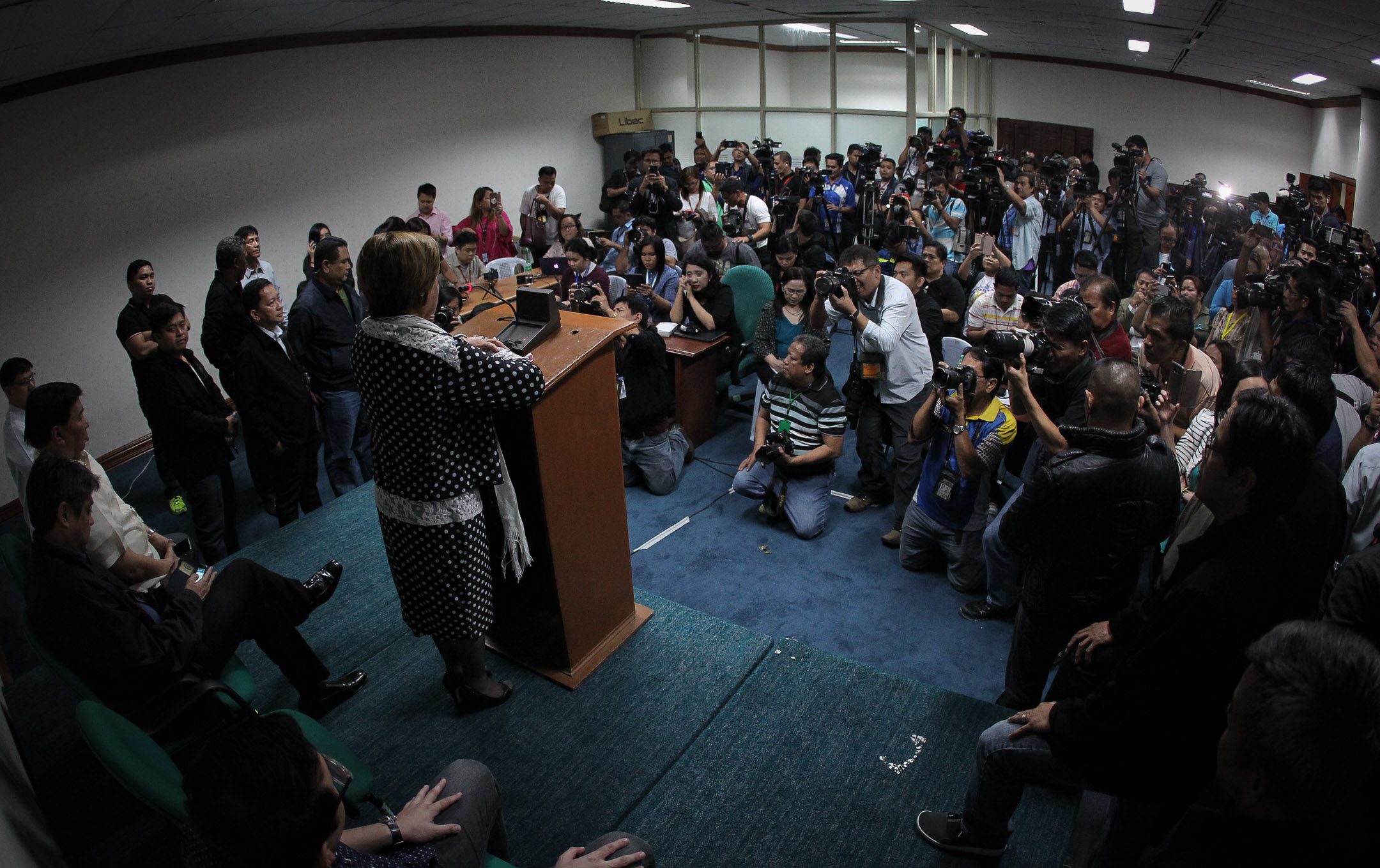 MANILA, Philippines (3rd UPDATE) – The police have given Senator Leila de Lima until 10 am on Friday, February 24, before they serve the arrest warrant against her.

A dismayed De Lima had returned to the Senate on Thursday evening, February 23, after learning that a team from the Criminal Investigation and Detection Group-National Capital Region (CIDG-NCR) would be arresting her at her home in Parañaque.

Earlier on Thursday, Judge Juanita Guerrero of Muntinlupa Regional Trial Court Branch 204 issued a warrant for the senator over drug charges. (READ: EXPLAINER: What is Leila de Lima being accused of?)

“I don’t want them to see me being arrested kaya dito po ako mag-iintay sa kanila. Pero sana po, huwag nilang pilitin na arestuhin kaagad ako ngayon pagdating nila dito… Maghintay lang sila sa labas, hindi ho nila puwedeng pilitin and then they will serve the warrant on me while I’m here in the office and I’m not yet ready to face them,” the senator said.

(I don’t want my family to see me being arrested that’s why I’ll wait here in the Senate. But I hope the police won’t try to arrest me immediately when they arrive here… They should just wait outside, they can’t force it, they can’t serve the warrant on me while I’m here in the office and I’m not yet ready to face them.)

(What is the difference between tonight and tomorrow morning? … It’s too unusual and to me, unjust, if they’ll force the arrest tonight. Anyway, like I said, I’m not going to escape, I’m ready to be arrested, but I hope not tonight. So I’ll just stay here at the Senate and wait for the sun to rise before facing them.)

De Lima also lamented the fact that she failed to see her sons at home because she had to rush back to the Senate.

“As a matter of fact, hindi na nga po ako naabutan ng mga anak ko (my sons were unable to catch me at home),” the senator said, explaining that her eldest son was stuck in traffic while her second son was taking his exams, which finished late.

De Lima’s camp then announced later on that the CIDG-NCR had agreed to wait until the morning. The CIDG-NCR has yet to speak to media.

De Lima, a staunch critic of President Rodrigo Duterte, has maintained that the charges against her are “plain and simple political persecution.”

She had also said that she had prepared herself to be the “first political prisoner under this regime.”

The Department of Justice filed 3 criminal complaints before the court against De Lima, accusing her of violating Section 5 of the Dangerous Drugs Act, which penalizes the “sale, trading, administration, dispensation, delivery, distribution and transportation of illegal drugs.”

The charges were filed 5 months after a sensational House inquiry initiated by administration allies, where New Bilibid Prison convicts were allowed to testify on De Lima’s alleged transactions with them. (READ: The public trial of Leila de Lima)

Presidential Spokesman Ernesto Abella on Thursday said the issuance of the arrest warrant is a “major step forward” in the Duterte administration’s war on drugs. – Rappler.com