HRW: Duterte could be held liable for crimes against humanity 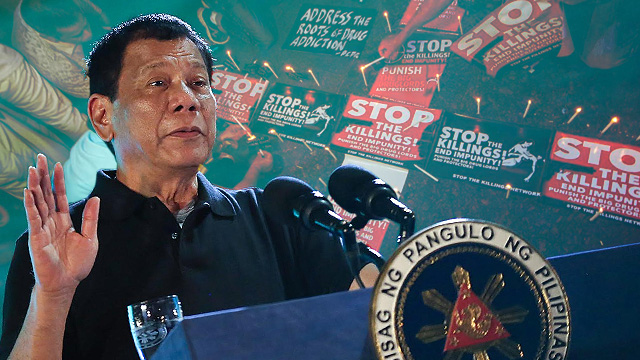 “Duterte’s outspoken endorsement of the campaign implicates him and other senior officials in possible incitement to violence, instigation of murder, and in command responsibility for crimes against humanity,” the New York-based human rights organization said in its latest report “License to Kill: Philippine police killings in Duterte’s war on drugs.”

Duterte has consistently defended his hard stance against illegal drugs and has often talked about shoot-to-kill orders in his various speeches. His government allies, however, are often quick to dismiss these statements as merely rhetoric. (READ: Shoot to kill? Duterte’s statements on killing drug users)

Despite no evidence linking Duterte to any specific incident of extrajudicial killing, HRW said that his repeated calls encouraging the killing of alleged drug dealers and users “is indicative of a government policy to attack a specific civilian population.”

“Any killings of drug suspects by police with an awareness of such a policy or plan would amount to crimes against humanity, for which senior officials could be held responsible as a matter of superior responsibility,” HRW said in its report.

This is the second HRW report involving Duterte. In 2009, the human rights organization released “You can die any time: Death Squad Killings in Mindanao” which tackled the vigilante killings attributed to the Davao Death Squad and the then Davao city mayor’s alleged involvement in it.

The doctrine of superior responsibility refers to imposing liability on senior officials for the “unlawful acts of subordinates” which they knew but did not address.

The human rights organization said there is no evidence that Duterte has “taken any steps to prevent or punish those responsible for the killings” despite having full knowledge of the rising number of suspected drug personalities ending up dead – either in police operations or vigilante killings  – in relation to his intensified campaign against illegal drugs in the Philippines.

“The unlawful killings being carried out by police forces ultimately under Duterte’s command have repeatedly been brought to his attention by the media, the United Nations, foreign governments, and domestic and international non-governmental organizations,” HRW said. “His public comments in response to those allegations are evidence that he knows about them.”

The International Criminal Court prohibits crimes against humanity which refers to “serious violations committed as part of a large-scale attack against any civilian population.”

The Rome Statute, which the Philippines signed and ratified in 2011, lists murder as one of the 15 forms of crimes against humanity.

The ICC, in October 2016, released a statement which indicated that it is “closely following” Duterte’s war on drugs.

ICC chief prosecutor Fatou Bensouda said they are “deeply concerned” that “public statements of high officials of the Republic of the Philippines seem to condone such killings and further seem to encourage State forces and civilians alike to continue targeting these individuals with lethal force.”

Any person in the country, she added, “who incites or engages in acts of mass violence including by ordering, requesting, encouraging or contributing, in any other manner, to the commission of crimes within the jurisdiction of the ICC is potentially liable to prosecution before the court.”

In response, Duterte called the tribunal “useless” and even threatened to follow his “idol” Russian President Vladimir Putin who withdrew his country’s signature from Rome Statute because of the ICC being “one-sided and inefficient.”

Amnesty International, in its report, “If you are poor you are killed”: Extrajudicial Executions in the Philippines’ “War on Drugs” released on February 1, also cited the “wave of extrajudicial executions” as incidents that “may amount to crimes against humanity.”

However, the ICC can only act when the national courts “are unable or unwilling to exercise jurisdiction.” Will the justice system in the Philippines eventually budge?  – Rappler.com