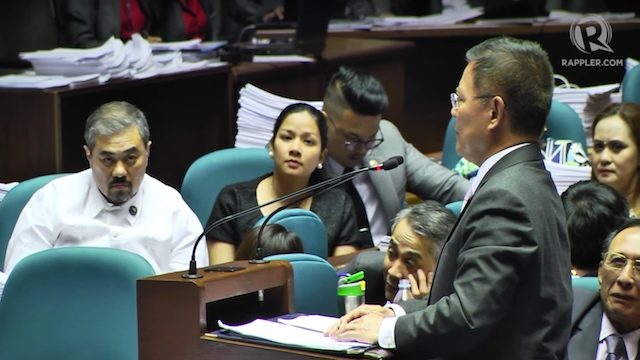 Facebook Twitter Copy URL
Copied
214 yes, 54 no, 1 abstain – that's how the House of Representatives voted for the death penalty bill

MANILA, Philippines – The House has spoken.

A total of 217 lawmakers from the House of Representatives voted in favor of the death penalty bill, while 54 voted against it and 1 abstained. A total of 257 out of 293 congressmen were present in the voting.

An overwhelming number of congressmen gives their approval to the bill.

ERIC SINGSON, DEPUTY SPEAKER: With an affirmative voting of 216, negative vote of 54, and abstention of one, House Bill Number 4727 is approved on 3rd reading

MARA CEPEDA, REPORTING: The measure allows judges to punish perpetrators of 7 drug-related crimes with either life imprisonment or death. The bill also allows the execution to be done either through hanging, firing squad, or lethal injection.

The bill’s passage at the house is expected because President Rodrigo Duterte counts at least 267 congressmen as allies.

REYNALDO UMALI, HOUSE JUSTICE PANEL CHAIRPERSON: Hopefully, now that the House of Representatives have spoken… Alam mo ito, boses ng tao ito eh. Siyempre I feel elated. I feel that my colleagues supported us. It was a, you know, a difficult ordeal that we went through, pero ‘yung pinagdaanan naman namin are clearly dilatory.

(Hopefully, now that the House of Representatives have spoken… you know that this is the voice of the people. Of course, I feel elated. I feel that my colleagues supported us. It was a, you know, a difficult ordeal that we went through, but what we went through are clearly dilatory.)

MARA CEPEDA, REPORTING: But not all administration-allied lawmakers voted in favor of the bill, including those who are currently holding House leadership titles.

Among them are the representatives from the Makabayan bloc, civil service and professional regulation chairperson Vilma Santos-Recto, and Deputy Speaker Gloria Macapagal-Arroyo.

It was under her presidency that the Philippines abolished the death penalty in 2006.

But for the death penalty opposers, the fight is not yet over.

MARA CEPEDA, REPORTING: With HB 4727’s approval on 3rd and final reading, the measure will now be transmitted to the Senate where it will go through another 3 readings.

The death penalty measure may have breezed through the House of Representatives, but the same cannot be said for the Senate. Senators opposing the bill are more vocal than their House counterparts.

Will senators be open to executing drug convicts or will they oppose this priority bill of the President?