Chamber of Mines: Lopez ‘unfit, unqualified’ to be DENR secretary 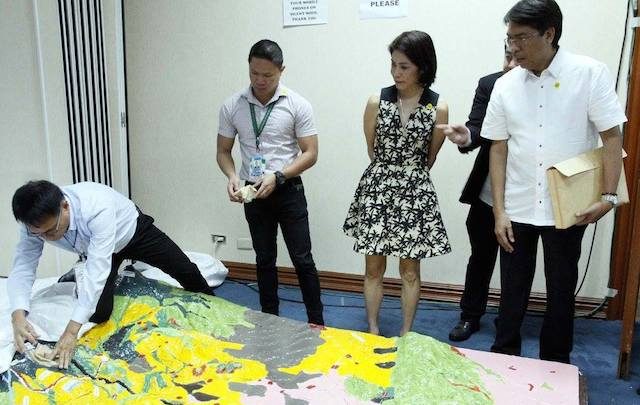 Facebook Twitter Copy URL
Copied
'If Ms Lopez does not, or cannot, implement the law, particularly on the issuance, monitoring, and regulation of MPSAs, she should not be confirmed as DENR Secretary,' COMP tells the Commission on Appointments

MANILA, Philippines – Philippine miners on Thursday, March 9, urged the Commission on Appointments (CA) to reject the appointment of Environment Secretary Gina Lopez, saying she was “unfit” and “unqualified” to lead her department.

Ronald Recidoro, Chamber of Mines of the Philippines vice president for legal and policy, read COMP’s statement at the confirmation hearing of Lopez before the CA committee on environment on Thursday. (WATCH: LIVE: Gina Lopez faces Commission on Appointments)

“Today, we oppose the confirmation of Ms Lopez as DENR Secretary because she has shown herself unfit and unqualified to be government’s lead regulator in natural resource development,” Recidoro said.

“Recent events have shown that we are dealing with someone who does not believe in the Constitution’s mandate for the State to undertake the exploration, development, and utilization of natural resources, and as such, has put us, government’s partners in mineral development, at a quandary,” he added.

COMP has been the most vocal among those against Lopez’s confirmation as environment secretary, ever since she announced the closure and suspension of 28 mining sites in the country – all run by COMP members. In February, the group submitted its formal opposition to Lopez’s confirmation before the CA.

Calling mining the “most misunderstood industry in the country today,” Recidoro cited the Philippine Mining Act of 1995 in saying that mining companies “can’t just go into any area and mine any which way they want.”

“Thus, if mining companies violate the law, is it not also a case of regulatory failure, where for lack of vigilance, manpower, and/or political will, spillage, siltation, and pollution happen?”

Recidoro said Lopez has the duty to enforce the law strictly and consistently: “If Ms Lopez does not, or cannot, implement the law, particularly on the issuance, monitoring, and regulation of MPSAs (mineral production sharing agreements), she should not be confirmed as DENR Secretary.”

1. She does not know the law. Citing the CA hearing on Wednesday, March 8, the group pointed out that Lopez struggled to define what an MPSA is, and “claimed presidential powers by declaring that she can prohibit mining even in non-proclaimed watersheds.”

The COMP went on to say that the Mining Act “actually allows mining in watersheds,” that the law does not prohibit open-pit mining, and that MPSAs “provide for a process to address violations before resorting to the ultimate penalty of cancellation.”

“By summarily ordering the closure of 23 and the suspension of 5 operating mines, and the cancellation of 75 MPSAs, Ms Lopez bypassed legal and administrative processes, and blatantly disregarded the sanctity of contracts. The companies named were vilified on national television without any prior notice of their announced suspension or closure.”

2. She cannot balance her functions as secretary of environment and of natural resources. According to the group, Lopez’s bias against mining “leaves her unable to appreciate the mechanics of the Mining Act, where rehabilitation is an indispensable requirement.”

3. Her actions expose the Philippine government to massive financial liability from international arbitration, similar to that awarded to PIATCO for the construction of the Ninoy Aquino International Airport Terminal 3. Lopez, the group said, “tarnishes the country’s image as an investment destination for PPP contracts.”

4. She is fast and loose with government funds. Citing the March 8 confirmation hearing, COMP said it heard the environment secretary “talk of investing millions from the DENR budget in eco-tourism and biochar projects as if they were ABS-CBN Foundation funds.” Before joining the government, Lopez had been chairperson of the ABS-CBN Lingkod Kapamilya Foundation.

COMP also took issue with  Lopez’s “engagement” of 5 additional undersecretaries “with no civil service eligibility, no appointment from the President, and likely not part of the approved budget of the DENR for the year.”

Recidoro also questioned Lopez’s “persecution” of the mining industry, which occupies only 0.2% of the country’s land area “but has contributed so much to countryside development.”

“We want to be clear: the issue here today is not the mining industry. The issue is whether or not Secretary-designate Lopez is the right person to head the DENR. We ask: Is she competent to lead the DENR? Does she have the experience, education, impartiality, and temperament to accomplish the Department’s objectives? To all these questions, we say no, no, and no,” he said.

Aside from Recidoro, Christian Uytico of Stand Firm (Filipinos for the Institution of Responsible Mining) and Lysander Castillo of the Philippine Business for Environmental Stewardship also expressed their opposition to Lopez’s confirmation.

Uytico questioned Lopez for assigning former Mines and Geosciences Bureau Director Leo Jasareno to head the mining audit, while Castillo decried the DENR’s announcement of the cancellation of MPSAs without prior notice to concerned companies. – Rappler.com